The first single from the upcoming TINA – THE TINA TURNER MUSICAL cast album is released today, to download and stream, by the Producers of Tina – The Tina Turner Musical and Ghostlight Records (5 February 2019) featuring Adrienne Warren performing the iconic song River Deep – Mountain High. Warren, who has played the role in the hit West End production since its world premiere, is featured on an accompanying music video of the single also released today. Click here to download and stream the single and here to watch the music video.

Tina Turner famously recorded River Deep – Mountain High in 1966, produced by Phil Spector as his ground-breaking masterpiece using his trademark Wall of Sound music technique. Turner would later recall, “I must have sung that 500,000 times. I was drenched with sweat. I had to take my shirt off and stand there in my bra to sing”. George Harrison, who worked with Spector when he later produced Let It Be for the Beatles, would later call it ‘a perfect record from start to finish’.

Tina Turner said: “At that very difficult time in my life, recording this song opened my eyes to possibilities. I felt liberated, excited, ready to challenge myself vocally. River Deep – Mountain High introduced me to the way I wanted to sing. I am thrilled that Adrienne has picked up the mantle and not only risen to the challenge but made this moment one of my very favourites in the musical. It is so right that this is the first single to be released from our cast album. She makes me very proud.”

Tali Pelman, Producer, Tina – The Tina Turner Musical said: “River Deep – Mountain High is a pivotal moment in the musical where Tina finds her voice as a solo artist. It was a turning point for Tina personally and is an epic moment in our show. It demands not only an extraordinary vocal talent but immense passion and fearlessness. To hear and watch Adrienne perform this song night after night is electrifying, and I am thrilled to have it captured here.” 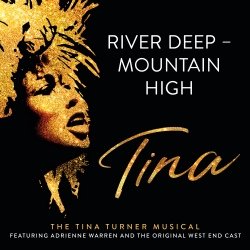 Kurt Deutsch, Founder of Ghostlight Records said: “Tina – The Tina Turner Musical has taken London by storm and, starting with this single, the world will get to hear what everyone has been talking about. Tina Turner is a music icon and Ghostlight Records is proud to create a cast album of this triumphant musical, its magnificent songs, and of course the star-making performance of leading lady Adrienne Warren.”

Last month over 200,000 new tickets were released for sale for TINA – THE TINA TURNER MUSICAL, the show based on the life of legendary artist Tina Turner, with bookings now being taken at the Aldwych Theatre to Saturday 21 December 2019.

The critically acclaimed production received its world premiere in April 2018 in London and subsequently has broken all Box Office records at the Aldwych Theatre. Next month, the German premiere of TINA – THE TINA TURNER MUSICAL begins performances at the Stage Operettenhaus in Hamburg and the musical will have its Broadway premiere in Autumn 2019.


TINA – THE TINA TURNER MUSICAL is produced by Stage Entertainment, Joop van den Ende and Tali Pelman, in association with Tina Turner. Adrienne Warren is appearing with the support of UK Equity, incorporating the Variety Artistes’ Federation, pursuant to an exchange program between American Equity and UK Equity.

Ghostlight Records has become the leading independent force in Original Broadway Cast Recordings – building a library of over 200 records over the past 19 years, featuring some of the most successful Broadway musicals and solo albums by Broadway’s brightest stars. Founded by Grammy Award winner Kurt Deutsch, Ghostlight has won Grammy Awards for The Book of Mormon, In the Heights and Beautiful – The Carole King Musical. Recent notable cast recordings include the 2018 Tony winner for Best Musical, The Band’s Visit, and the blockbuster viral sensation Be More Chill. Ghostlight has also released solo albums from Patti LuPone, Kelli O’Hara, Sutton Foster, Billy Porter, and more. The label continues to support the new generation of musical theatre composers and has developed extensive relationships with Jason Robert Brown, Michael John LaChiusa, and David Yazbek, as well as Lin-Manuel Miranda, Pasek & Paul, Tom Kitt, Joe Iconis, and Shaina Taub. Ghostlight Records is part of the Arts Music division at Warner Music Group.
www.GhostlightRecords.com

After sell-out runs at Hope Mill Theatre, Manchester, and The Park Theatre, London, in 2022, Maureen Lipman returns to the West End with a performance … END_OF_DOCUMENT_TOKEN_TO_BE_REPLACED

THE PHANTOM OF THE OPERA at Her Majesty’s Theatre today announces Jon Robyns as ‘The Phantom’ from Monday 3 April 2023, Holly-Anne Hull as ‘Christine … END_OF_DOCUMENT_TOKEN_TO_BE_REPLACED

2023 marks the 50th Anniversary of the legendary smash hit musical The Rocky Horror Show, as it continues to play a newly extended tour through 2023 … END_OF_DOCUMENT_TOKEN_TO_BE_REPLACED