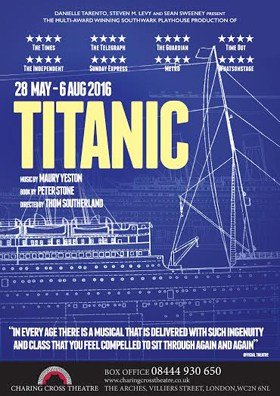 The thrilling London premiere of the Broadway musical Titanic became one of the hottest must-see shows, winning a clutch of Best Musical awards, 4 and 5 star rave reviews across the board and it was Critics Choice in most national newspapers.

Now the multi award-winning production, first seen in 2013 at Southwark Playhouse, is coming back to London with director Thom Southerland once again at the helm.

Southerland is a fast rising star director, who has enjoyed considerable acclaim and success with a string of striking Off West End revivals and premieres of major Broadway musicals, including the recent sold-out European premiere of Grey Gardens, starring Sheila Hancock and Jenna Russell at Southwark Playhouse.

Speaking from Japan, where he’s directing a new version of his London smash hit, Grand Hotel, he said: “I am incredibly excited that Titanic will set sail for London again. Having created the production in the intimate setting of Southwark Playhouse, it will be wonderful to see Maury Yeston’s epic musical at such close proximity again. Having since opened productions of the show in major theatres in Japan and Canada, it really feels like the show is coming home, allowing us to board the ship again and experience the events and passengers as they travel on their fateful journey.”

In the final hour of 14 April 1912 the RMS Titanic, on her maiden voyage from Southampton to New York, collided with an iceberg and ‘the unsinkable ship’ slowly sank. It was one of the most tragic disasters of the 20th Century. 1517 men, women and children lost their lives.


Based on actual characters aboard the greatest ship in the world, Maury Yeston (Nine, Grand Hotel) and Peter Stone’s stunning musical focuses on their hopes and aspirations. Unaware of the fate that awaits them, the Third Class immigrants dream of a better life in America, the newly-enfranchised Second Class dream of achieving the lifestyles of the rich and famous, and the millionaire Barons of the First Class dream of their hegemony lasting forever.

'Look anyone will tell you, I’m a pretty straight sort of guy.' Tony Blair A reckless reappraisal of the life of former Ugly Rumours front man and … END_OF_DOCUMENT_TOKEN_TO_BE_REPLACED

Michael Harrison and the Really Useful Group are thrilled to announce that The Wizard of Oz, the musical based on the iconic story by L. Frank Baum, … END_OF_DOCUMENT_TOKEN_TO_BE_REPLACED

Following major demand for tickets, the Queen of comedy Dawn French has announced a host of new UK tour dates for her critically acclaimed live … END_OF_DOCUMENT_TOKEN_TO_BE_REPLACED