‘Look anyone will tell you, I’m a pretty straight sort of guy.’ Tony Blair 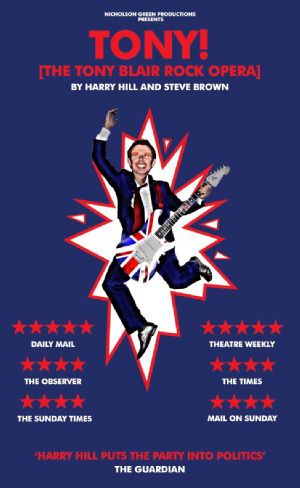 Following its critically acclaimed, sold-out world premiere at Park Theatre this summer Harry Hill and Steve Brown’s musical, TONY! [The Tony Blair Rock Opera], will run in London’s West End at the Leicester Square Theatre from 15 April to 21 May. Following the West End limited season, the musical will tour the UK from 25 May to 29 July, including Tony Blair’s previous constituency of Sedgefield, where it will play from 27 to 29 July in the Parish Hall, with further dates to be added.

The musical tells the story of how one man went from peace-loving, long-haired hippy and would-be pop star to warmongering multimillionaire in just a couple of decades. Throw in a stellar cast of larger-than-life characters – Cherie Blair, Princess Diana, John Prescott, Peter Mandelson, Alastair Campbell, Osama bin Laden, George W Bush, Saddam Hussein and Gordon Brown – it’s Yes, Minister meets The Rocky Horror Show and a musical like no other.

Please note: Neither Tony Blair, the Tony Blair Institute, nor any other person featured in this production have endorsed the production or its marketing materials and are in no way affiliated with the production.

Harry Hill and Steve Brown said, “After the great response from audiences on its launch this summer, we’re thrilled that TONY! is going on the road in 2023. It’s a show for Tony Lovers and Haters everywhere – and everyone in between – don’t expect a history lesson – in our world Tony’s born singing and dancing, Saddam Hussein is played as Groucho Marx and Gordon Brown occasionally turns into the Incredible Hulk – let’s just say all the facts are there… but not necessarily as they occurred! Tony hasn’t yet replied to our invite to see the show, but we do hope he’ll pop along to his old stomping ground of Sedgefield to give his verdict when we open there at the Parish Hall. Tony? If you’re reading this we’ve put a couple of tickets in your name on the door.”

Following its multiple West End runs, and continuing success at its home – The Other Palace, Heathers the Musical will embark on its highly … END_OF_DOCUMENT_TOKEN_TO_BE_REPLACED

After creating the “absorbing and provocative” Version 2.0 and the “eminently lovable” Letters, Kashyap Raja returns to London with his new play Earth … END_OF_DOCUMENT_TOKEN_TO_BE_REPLACED