Home » London Theatre News » Top shows of 2017 in London – from reviewers at LondonTheatre1.com

2017 has been a busy year with our team of reviewers attending and reviewing nearly 800 productions across London, including West End and Off-West End. These are the top picks for the year.

1. Bat Out of Hell The Musical – London Coliseum (21 June)
Andrew Polec, as Strat (leader of ‘The Lost’, a collective of young rebels) leads a ridiculously talented cast with flair, energy and intensity. Polec’s vocals are outstanding, his stage presence amazing, and he was conspicuous by his absence whenever off-stage.

2. Everybody’s Talking About Jamie – Apollo Theatre (22 November)
Hilarious and hard-hitting in equal measure, this is a great British musical not to be missed. I don’t like this show. I love it.

3. Barber Shop Chronicles – National Theatre, Dorfman (7 June)
Filled with laugh-out-loud humour as well as food for thought, this electrifying and magnificent production is theatrical heaven from beginning to end.

4. Henry V – Southwark Cathedral (3 February)
I wasn’t prepared for… quite how different and spellbinding this production was from any other Henry V I’ve seen before… Powerful and poignant.

5. Who’s Afraid of Virginia Woolf? – Harold Pinter Theatre (9 March)
The narrative unfolds over just one night, and this production is so intense and absorbing I found myself willing both the ‘interval’ of 15 minutes between Act 1 and Act 2 as well as the ‘pause’ of just five minutes between Act 2 and Act 3 to end.

6. The Life – Southwark Playhouse (30 March)
The whole cast are well-drilled by veteran director Michael Blakemore, and the show is clearly
influenced by more than one well-known musical theatre show […] what a magnificent and sensational
production this is.

7. Hamlet – Harold Pinter Theatre (15 June)
These sofas, these business suits, these sliding doors. It’s all bound to annoy the purists to high heaven. No matter. This is a surprisingly warm and inviting production, and a welcome addition to the many versions of this timeless play.

8. 31 Hours – The Bunker Theatre (6 October)
An admirable play with compelling performances, this intriguing and informative production doesn’t apportion blame or offer tidy solutions to a persistent problem. The script is poetic when it wants to be, other times flowing between characters so much it requires impeccable timing and pacing, which this cast possesses in abundance.

9. The State of Things – Jack Studio Theatre (13 September)
A joyous final number sends the audience out with cheerfulness, even if all the ends aren’t tied up, loosely or otherwise. The script is tasteful and imaginative.

1. Priscilla Queen of the Desert, Bridewell Theatre
This story of friendship and hope took two drag queens and a trans woman from Sydney to Alice Springs, in a big pink bus. Along the way, they met new friends, and face rampant homophobia. SEDOS brought every element of the show together beautifully, and to a standard that you would expect to see in the West End. Sold out virtually as soon as it was announced, this was the ‘must-see’ production of the year.

2. La Cage aux Folles, New Wimbledon Theatre
This is was a touring production of a show that demonstrates the importance of family and how much a parent will sacrifice to help their offspring. John Partridge put on the stiletto heels and sequined gowns as Albert/Zaza and delivered a tour de force performance. With wonderful sets, costumes and songs like the iconic “I Am What I Am” this production hit all the right notes.

3. Richard III, Cockpit
The amazing Kim Hardy led the cast in the title role of this first-rate production of Shakespeare’s play in fine style. With some extremely realistic battle scenes, the entire production brought the story to life in a really fantastic way. Richard is a role that Kim was born to play and has set the standard for anyone that wants to take on the king in the future

4. Henry V, Southwark Cathedral
Another touring production as Antic Disposition visited various cathedrals around the UK this year with their version of this classic Shakespeare play. I caught the production at Southwark Cathedral where, under the watchful eye of the Bard himself. Aside from the highly impressive location, the production itself – set in a World War I field hospital – adds a wonderful poignancy to the show. Rhy Bevan was excellent in the role of Henry and led a superb cast who between them made this a very memorable show. 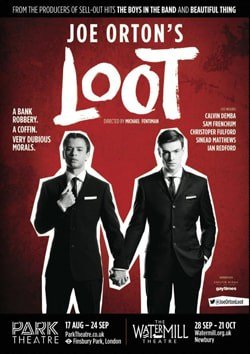 5. Loot, Park Theatre
Back to the swinging sixties with this production of Joe Orton’s farce set around the funeral of an elderly woman. Whilst most assuredly of its time in some of its attitudes, Loot still works very well at holding various parts of society up to a critical light. The cast, set and costumes all worked perfectly to bring the sixties back to North London and overall this was one of the funniest things I’ve seen in a long while.

6. The Clockwork Orange, Park Theatre
Another trip back to the sixties with this all-male production of Anthony Burgess’s horrific story of a dystopian future that, at times, has too many links to the present to make comfortable viewing. Stripped back in colour and set, the sho is headed up by Jono Davies absolutely smashing the lead role of Alex. An intense production that is not easy to watch but is totally engaging.

7. Lord Dismiss Us, Above the Stag Theatre
Glen Chandler’s play is partially based on genuine experiences at a public school in the sixties and as such is a very well observed study of the English upper classes at a time when the world was about to change. However , instead of focussing on the outside, the play brings us into the school where a violently homophobic new headmaster decides there will be none of that business going on in his school. One of the great elements of the play is that one of the more negative characters from the start of the play turns out ot be the hero of the story. A lovely bit of writing, excellent translated to the stage.

8. Posh, Pleasance Theatre
Probably one of the real surprises of the theatrical year for me. Posh was the story of an elite male dining club from one of our red brick universities on a night out. A fairly normal story you might think, but in this production, all of the roles were played by women. Retaining their femininity, the actors really brought out the roles well to the point that their gender was totally unimportant. A brave staging choice that worked extremely well.

9, Boys in the Buff – The Musical, Stockwell Playhouse and Boys in the Buff – The Concert, King’s Head
Tackling the subject of body image and how we view ourselves and each other is not an easy thing to do but in these productions – the full one and the cut down version – it is done in a wonderful way. Humour, songs, dance and great writing combined to make the Boys in the Buff shows something well worth seeing. A fine cast, willing to give their all for the show, really entertain and inform and leave everyone feeling just that bit better about themselves.

10. Out There on Fried Meat Ridge Road, White Bear Theatre
Back in January, this show showed up at the newly refurbished White Bear Theatre and completely took my breath away. The story of the inhabitants of a run-down motel and the wonderful revelations that come out, with the wonderful twist at the end, set the bar for every show from then on. Following its time the White Bear, the play transferred for a very successful run at the Trafalgar Studios.

1. Out There On Fried Meat Ridge Road by Keith Stevenson at Trafalgar Studios
Small town America at its side-splittingly smallest.

3. Everyone’s Talking About Jamie by Tom MacRae & Dan Gillespie Sells at The Apollo Theatre
Funny and heart-warming – best new musical of the century.

4. We Are The Lions Mr Manager by Neil Gore @ Tara Arts Theatre

5. The Girl From The North Country by Conor McPherson @ The Old Vic (transferring).
6. The End of History by Ian Hollingshead @ Tristram Bates Theatre
7. Happiness by Lily Lowe-Myers @ The Bridewell Theatre
8. Rules For Living by Sam Holcroft @ The Rose Theatre
9. The Comedy About A Bank Robbery by Henry Lewis, Jonathan Sayer and Henry Shields – The Criterion Theatre.
10. Reasons To Be Cheerful by Paul Sirett @ Theatre Royal, Stratford East

The Ferryman – the most superb play/production seen in London for years! Totally gripping throughout its 3 and a quarter hours – yet nothing happened! So Irish!

The Best Man – which I saw at Windsor and which has not yet opened in London: superb, a gripping play about USA presidential election: could have so easily have been trite but beautifully written and directed and co-starring Jack Shepherd as the terminally ill past president. He was superb: charismatic. I hope Bill Kenwright brings this into town in 2018. (Martin Shaw was very good too!)

Labour of Love at Noel Coward Theatre: again superbly written and acted.
There have been many first-rate plays this year!

Rent 21st Anniversary UK Tour – this show stole my heart and reignited my love for theatre. Bruce Guthrie directed the production perfectly. It was raw, gritty and truly touching. Choreography by Lee Proud was innovative and interesting and the entire cast were outstanding. It felt like they were living their lives through the character for those 2 and a half hours each night. All cast members poured everything into each performance and everything came together to create magic on stage.

Yank at the Charing Cross Theatre, London – the story was powerful, gripping and relevant. Scott Hunter and Andy Coxon were just superb in their roles, particularly Scott Hunter who shone throughout. Staging and choreography were slick and in keeping with the story. It was also fantastic to see an audience of predominantly men, so many in fact that men were lining up for the toilet. 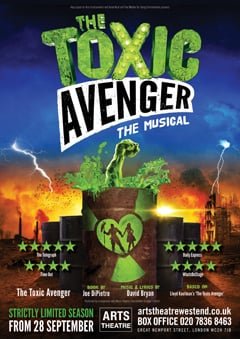 The Toxic Avenger at The Arts Theatre, London – the show really impressed me with its comic-timing, fantastic use of the stage and the actors were fantastic. Songs were catchy and the plot fitted well together. Certainly different from my usual favourites but I laughed my way through this show.

Girl From The North Country:
This would have been a wonderful straight play with a tremendous book from Conor McPherson but add some of Bob Dylan’s greatest songs and you have a masterpiece. It’s atmospheric and at times mesmerising. I’ve seen it twice at The Old Vic and hope to see it again when it transfers to the Noel Coward next year.

Follies:
Follies has always been a difficult musical to stage due to the fact it has no real plot and a downbeat ending but the National have done Sondheim’s Magnus Opus proud. The production is wonderful and the performances from the likes of Imelda Staunton, Janie Dee and Philip Quast sublime.

Romantics Anonymous:
This was the most magical piece I’ve seen on the London stage for a long time and is Emma Rice’s swansong before she leaves her post as Artistic Director at the Globe. This was a bit of surprise as being at the Sam Wanamaker Playhouse, it slipped under my radar. Let’s hope it gets a transfer to the West End as it deserves it.

Alice’s Adventures Underground in the Vaults – a kooky, surprising and interactive take on the classic tale.
Hedda Gabler by Euphonia Studio at the Drayton Arms – a stark, pared-down, psychologically compelling performance.
When Midnight Strikes by MKEC Productions at the Drayton Arms – a funny and moving tale of a special New Year’s Eve.

Regent’s Park Open Air Theatre have today confirmed the casting for the title roles in Romeo and Juliet, which opens the 2021 season on Thursday 17 … END_OF_DOCUMENT_TOKEN_TO_BE_REPLACED

Andrew Lloyd Webber’s The Phantom of the Opera returns to its home, Her Majesty’s Theatre London, from 27th July. Experience the thrill of the West … END_OF_DOCUMENT_TOKEN_TO_BE_REPLACED