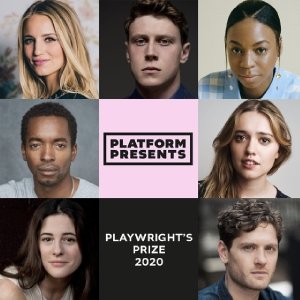 As the judges make the final decision on the winner of the £5,000 2020 Platform Presents Playwright’s Prize, filmed excerpts from five of the finalists plays, recorded in isolation during Lockdown by major stars of TV and film, are being released.

‘My Dad’s a Cunt’ by Anoushka Warden
Aimee Lou Wood (above) played Aimee Gibbs, a central character in two seasons of the Netflix comedy series ‘Sex Education’. She will soon to be seen in the feature film ‘Louis Wain’ alongside Benedict Cumberbatch and Claire Foy.

Watch Aimee Lou Wood in the excerpt from ‘My Dad’s a Cunt’ with this link:
https://www.youtube.com/watch?v=fpz951fVvUo

‘Is Edward Snowden Single?’ by Kate Cortesi
Dianna Agron starred in ‘The Family’ opposite Robert DeNiro and Michelle Pfeiffer, ‘I Am Number Four’ and ‘ZIipper’ for producer Darren Aronofsky. Dianna came to prominence as Quinn Fabray in Ryan Murphy’s hit TV series ‘Glee’.

Watch Dianna Agron in the excerpt from ‘Is Edward Snowden Single?’ with this link:
https://www.youtube.com/watch?v=w_IplJjcDYY

‘Burning Falling Rising Monster’ by Kate Vozella
Kyle Soller and Phoebe Fox feature.
Kyle won the Olivier Award and Critics Circle Award as Best Actor in ‘The Inheritance’ in the West End and on Broadway. Phoebe was nominated Best Supporting Actress in the Oliviers in ‘A View from the Bridge’ in the West End, which she transferred in to Broadway. Phoebe can currently be seen in ‘The Great’ on Hulu.

Watch Kyle Soller and Phoebe Fox in the excerpt from ‘Burning Falling Rising Monster’ with this link:
https://www.youtube.com/watch?v=bAyCD2bQzEA

‘Stripped’ by Hew Rous-Eyre
Pippa Bennett-Warner recently played Shannon in ‘Gangs of London’.
Aki Omoshaybi had the lead role in the film ‘Burning Men’ and was in ‘Star Wars: The Last Jedi’.

Watch Pippa Bennett-Warner and Aki Omoshaybi in the excerpt from ‘Stripped’ with this link:
https://www.youtube.com/watch?v=hbzTTcPObfg

Watch George MacKay in the excerpt from ‘Burn’ with this link:
https://www.youtube.com/watch?v=bAyCD2bQzEA

There are four more plays in consideration:
‘Private’ by Mona Pirnot
‘Fuckboys’ by Katie Burnett
‘Everything Beautiful Happens At Night’ by Ted Malawer
‘Bird in a Ribcage’ by Lizzie Stern

The videos will be hosted from Monday, August 10th on the Google Arts & Culture Hub and released on the Platform Presents

Production company Platform Presents was founded in 2017 by actress Gala Gordon and producer Isabella Macpherson to give a platform to rising star talent, with a particular interest in female voices. And to raise the £5,000 prize money for their annual Playwright’s Prize, Platform Presents founded an annual Poetry Gala, to celebrate and highlight great writing, through the inspiring medium of poetry, brought to life by stars of the stage and screen.

For the 2020 Platform Presents Prize, over 200 plays were submitted from writers based from London to New York, LA to Melbourne. These were shortlisted to nine by the Platform
Presents co-founders and script readers.

The Platform Presents prize includes ongoing mentoring as well as the £5,000 cash prize.