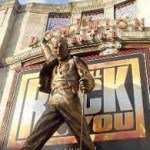 The world is full of music. We have a never-ending supply of boy bands, girl bands, pop stars, rappers, classical singers – and X-Factor contestants. Yes, they get a class of their own. They come and go like the tide: for every washed-up music act that disappears back into the vast ocean of oblivion, another rides in on a ten-foot wave and crashes onto the music scene with an almighty splash. It’s an inter-changeable business, where lasting success is hard to find. There’s always someone younger or more controversial and all that fame and fan adoration can vanish in an instant.

There is, as with most things in life, always exceptions to the rules however. Every now and then, someone special comes along and their music makes a mark on the world that will still be there long after they’re gone. Their music doesn’t die with them; instead it takes on a life of its own. Everyone knows their name and their music and it gets passed down to an entirely new generation of fans who, in their time, hadn’t even been born yet. Michael Jackson was one of those special people, as was Elvis (believe it or not, it’s been thirty-four years since he said ‘The Last Farewell’ to this life) and, of course, Freddie Mercury.

Today marks the 20th anniversary of the death of Freddie Mercury, lead vocalist of the rock band Queen. He died from Bronchial Pneumonia resulting from AIDS at his Kensington home on 24th November 1991, aged 42.

Mercury was a prolific songwriter and penned many hits for Queen, including: We Are The Champions, Bicycle Race, Somebody To Love and, probably the band’s greatest hit, Bohemian Rhapsody. One of rock’s ‘greatest all-time entertainers’, he was well-known for his powerful stage presence and incredible vocal range – as well as that famous moustache of course, which made its first appearance in the video for Play The Game in 1980. A 3 metre-high statue of the singer overlooks Lake Geneva in Montreaux, Switzerland and a replica of it stands atop the Dominion Theatre in London’s West End, where the Queen musical We Will Rock You has played since 2002.

We Will Rock You is a jukebox musical featuring the songs of Queen, written by Ben Elton in collaboration with Queen band mates, Roger Taylor and Brian May, who has made numerous special appearances in the musical. It opened at The Dominion on 14th May 2001 and, although not well-received by the critics, audiences quickly took it to their hearts and it remains one of the West End’s most popular shows to date.

The book to the musical is what most critics took issue with. The futuristic story is set in a time where musical instruments are banned and generic pop music rules the ‘Ga Ga’ world. A group of rebels seek to break free from the constraints of this uniform society with the aid of prophetic hero Galileo, who must find the ‘mighty axe of a great and hairy guitar god’, hidden in the place of living rock. The story is stretched rather thin at times as it attempts to link from one Queen song to another, but I’ve seen WWRY and you know what – when the music is this good, who cares? Seeing an entire audience on their feet for the musical finale, singing along and waving their glow sticks in the air, just goes to show how beloved Queen’s music still is and how much it impacted on the world.

Now in its tenth year, We Will Rock You is showing no sign of slowing down as its popularity continues to grow. Every night, the cast recreate the magic of Queen in celebration of one of recent history’s finest bands and the memory of one of the most inspired and exceptional performers ever to have lived. Every show is a tribute to Freddie Mercury, but the best tribute of all is keeping the music alive – for now and for a very long time, ‘the show must go on’. Rest In Peace Freddie.

Following its multiple West End runs, and continuing success at its home – The Other Palace, Heathers the Musical will embark on its highly … END_OF_DOCUMENT_TOKEN_TO_BE_REPLACED

After creating the “absorbing and provocative” Version 2.0 and the “eminently lovable” Letters, Kashyap Raja returns to London with his new play Earth … END_OF_DOCUMENT_TOKEN_TO_BE_REPLACED