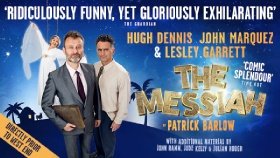 Three towering talents play a cast of thousands in this new comedy by the writer of the Olivier Award-winning West End hit The 39 Steps as Patrick Barlow’s The Messiah tours the UK this Autumn. Starring Hugh Dennis, Lesley Garrett and John Marquez, the funniest and most magical nativity you’ll ever see opens at the Birmingham Repertory Theatre on October 15th, 2018 before touring to New Theatre, Cardiff; Lyceum Theatre, Sheffield; Cheltenham Everyman Theatre and Richmond Theatre.

A traveling theatre troupe of two actors and an opera singer are set to arrive on camel back in venues across the UK to masterfully enact the greatest story ever told. Join the absurdly talented Maurice Rose (Hugh Dennis), the alarmingly unpredictable Ronald Bream RAC (John Marquez), and the distinguished diva Mrs Doreen Small (Lesley Garrett), in a hilarious Christmas comedy that conjures up the sublime, the ridiculous and the truly angelic.

Joseph, Mary, the Archangel Gabriel, Herod, God and an ox are all authentically portrayed in this vibrant comedy weaving visual invention with a hint of the divine, The Messiah is a love letter to theatre, theology and the great man himself.

Hugh Dennis is one of Britain’s best-loved comics and an award-winning and multi-award nominated actor and writer. He’s star of the BBC2 hit panel show, Mock The Week and BBC1’s hilarious sitcom Outnumbered. He is also a firm radio favourite, both writing and presenting Radio 4’s award-winning comedy The Now Show and Radio 2’s It’s Been A Bad Week.

Lesley Garrett CBE is Britain’s best-known soprano, regularly appearing in opera, musical theatre, concert, television and on CD’s. For more than 30 years she has enjoyed one of the most successful careers of any modern-day, classically trained soprano. From Rossini’s famed opera The Barber of Seville at the Coliseum, to West End musical hits, The Sound of Music and Carousel, Garrett has become a real national treasure.

John Marquez is best known for his role as PC Joe Penhale in the hit ITV Comedy series, Doc Martin. TV roles include Porridge, In the Club, Death in Paradise, Hotel Babylon and Suburban Shootout. Recent theatre roles include Dirty Rotten Scoundrels (The Savoy Theatre) and Once in a Lifetime (The Young Vic).

The Messiah comes from The 39 Steps writer, Patrick Barlow – who also directs this production. His other stage works include his new version of A Christmas Carol starring Jim Broadbent as Scrooge (Off-Broadway / Noel Coward Theatre). Patrick is also celebrated for his two-man theatre company The National Theatre of Brent, (Wagner’s Ring, The Charles and Diana Story and The Wonder of Sex). Screen and theatre acting credits include A Funny Thing Happened On The Way To The Forum, Loot, Wind in the Willows (NT), Absolutely Fabulous, Jam and Jerusalem, Shakespeare in Love, Notting Hill, Bridget Jones, Nanny McPhee and most recently A Very English Scandal.

The Messiah promises to be the funniest and most magical Nativity you will ever see.

Sonia Friedman Productions has announced that Ruth Wilson will star in Ivo van Hove’s adaptation of Jean Cocteau’s The Human Voice, which he also … END_OF_DOCUMENT_TOKEN_TO_BE_REPLACED

The award-winning smash-hit production of Girl From The North Country, written and directed by celebrated playwright Conor McPherson (The Weir, The … END_OF_DOCUMENT_TOKEN_TO_BE_REPLACED

John Barrowman is back on tour with his new show ‘I am What I am’ The tour launches on Saturday 30 April, 2022 at Southend‘s Cliff’s Pavilion and … END_OF_DOCUMENT_TOKEN_TO_BE_REPLACED

Producer Karl Sydow has announced the West End return of a dazzlingly renewed version of Dirty Dancing - The Classic Story On Stage, following a … END_OF_DOCUMENT_TOKEN_TO_BE_REPLACED