Underbelly are thrilled to announce that multi-award-winning improvised comedy troupe Austentatious will be setting the stage alight in London with seasons at both London Wonderground at Earls Court from 18th July 2021 and the Fortune Theatre from 1st November 2021. 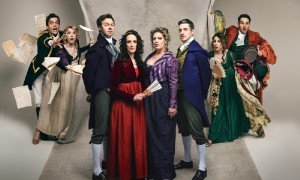 London Wonderground will see Austentatious performing in the Udderbelly, the well-loved Big Purple Cow, for 6 exclusive performances. The festival will be take place on the former Earls Court 2 Exhibition Centre and will feature multiple performance venues, outdoor bars and food offerings as well as rides and a city beach. The show will be a shorter offering of one hour long. In November, Austentatious will be returning to the Fortune Theatre with a brand-new weekly residency, just in time for the Festive Season. Starting on 1st November and concluding on 19th December.

Austentatious are the original regency inspired comedy masterpiece inspired by the novels of Jane Austen – fans of Bridgerton please look no further – Austentatious will delight audiences with their tongue in cheek and mischievous performances of ‘lost’ masterpieces which have included Dirty Darcying, The Bodice Guard, Hold Me Closer Tiny Darcy and We Will Frock You -no two shows are ever the same. Performed in full Regency costume with live musical accompaniment, this is a treat guaranteed to delight Austen novices, die-hard fans as well as a host of brand-new audiences. Expect witty heroines, dashing gents and preposterous plots. Swooning guaranteed!

As well as their West End residency and performances at Wonderground Festival they are also embarking on a tour of the UK which begins on 22nd June 2021. A night with Austentatious is a complete joy – the improvisation is skillful, the team spirit infectious, and the laughs seldom stop!

The group have established themselves as one of the UK’s most popular live acts, with consecutive sell-out runs at the Edinburgh Fringe under their belt, monthly West End residencies in 2018 and 2019, as well as a BBC Radio 4 special to mark the bicentenary of Austen’s death.

Austentatious said: “It is with the greatest pleasure that after such a long delay we are able to saddle up the horses, don our best bonnets & ride back into London Town! We are enamoured, overjoyed & whelmed indeed to begin performing at the new Earls Court Wonderground this Summer, before we ride off to back to our regular London home for a Winter of shows at the Fortune Theatre! Prepare your best mask, dust off your social breeches & join us for japes, laughs & silliness!”

Martyn Wood, Associate Producer for Underbelly Productions said: “After a long hiatus from the stage Underbelly is thrilled to be bringing Austentatious and their special brand of Austen inspired mayhem back to London audiences. With both a short season at our exciting new Wonderground site in Earl’s Court, and a return to their West End home at the Fortune just in time for Christmas, there are plenty of chances to enjoy an evening of hilarious and unpredictable antics from these masters of comedy improv.”

Previous ‘lost’ masterpieces have included Monster Hangover Abbey, The Bodice Guard, Mansfield Shark, Strictly Come Darcy, The Empire Line Strikes Back and Bath To The Future to name but a few! No two shows are ever the same. Performed in full Regency costume with live musical accompaniment, this is a treat guaranteed to delight Austen novices, die-hard fans as well as a host of brand-new audiences.

Austentatious Loyalty Card (valid for the Fortune season)- see the show four times and your fifth time is free! Available to pick up at the Fortune Theatre Box Office.

Austentatious is at Fortune Theatre from Monday 1st November, 2021 to Sunday 19th December, 2021.

Sir David Suchet makes his eagerly awaited return to UK stages in POIROT AND MORE, A RETROSPECTIVE this autumn (2021). Following a successful tour of … END_OF_DOCUMENT_TOKEN_TO_BE_REPLACED

Selladoor Worldwide is delighted to cheer on the full cast of BRING IT ON THE MUSICAL, who will be joining musical theatre and TV star Amber Davies as … END_OF_DOCUMENT_TOKEN_TO_BE_REPLACED