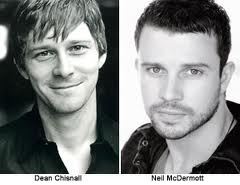 It was announced yesterday that Dean Chisnall and Neil McDermot are to lead the cast of Shrek The Musical, when they change over on 29th February 2012. Richard Blackwood is to stay on as Shrek’s talkative sidekick Donkey, while McDermot replaces Nigel Harman as the vertically-challenged Lord Farquaad and Chisnall takes over from Nigel Lindsay as lovable green ogre, Shrek.

McDermot is popularly known for his role of bad-boy Ryan Molloy in Eastenders, but he has plenty of theatre credits to his name, having previously performed at The London Palladium in musicals Follies and The Sound of Music.

Chisnall has previously appeared in productions such as Evita and Love Never Dies and is an original Shrek cast member, currently covering a selection of ensemble roles, including Papa Ogre. He is also the understudy for Shrek, having played the part of the lovable green ogre on a number of occasions since the show opened – including a company appearance on Britain’s Got Talent with then-Fiona, Amanda Holden, who is a judge on the ITV talent contest.

It’s wonderful to see when an understudy’s hard work pays off and they are promoted to a lead role. Celia Graham was understudy to Sierra Boggess’ Christine in Love Never Dies and took over when she left, Killian Donnelly was bumped up to full-time Enjolras in Les Miserables after understudying the role and Kerry Ellis replaced Idina Menzel as Elphaba in Wicked, going on to win Best Takeover in a Role in the 2008 Whatsonstage.com Awards. These are just a few examples of understudies who have been promoted, to great acclaim: it is however, rarer than you might expect.

It would seem to be the obvious first choice when cast changes are going on. The understudy already knows the part and has experience of it, saving on rehearsal time, costume fittings and so forth. Although it shouldn’t be a given that the available role automatically goes to the understudy, if they’re doing a good job with it, then why not reward them for that? Theatre-goers recently spoke up in support of fellow Shrek cast member Alice Fearn, who acts as understudy to the role of Princess Fiona. When Amanda Holden announced her early departure from the show due to her pregnancy, many called for Fearn to take over. Instead, Girls Aloud’s Kimberley Walsh was brought in as the new Fiona.

Understudies are sadly under-appreciated; often snubbed by their own shows and met with derision and pre-judgement by audience members. Yet, they are one of the most essentially hard-working members of the cast. Performing onstage is a demanding job in itself, but when you are given an hour or so notice, it becomes that much harder. Sometimes there is no notice at all, with an understudy forced to step into the role in the middle of a show if the lead is taken ill, for example.

I’ve seen many understudies perform and have always been impressed by them, at times more so than I was by the lead. I can only think of one instance in which I was disappointed; I won’t name the actor or the show, but they were a second cover and completely unsuited to the part. Awful.

Dean Chisnall is tremendous though, so I’m thrilled that he has been given this opportunity. There needs to be a little more faith in our understudies – they’re amazing; it’s time everyone else knew that.

Following its multiple West End runs, and continuing success at its home – The Other Palace, Heathers the Musical will embark on its highly … END_OF_DOCUMENT_TOKEN_TO_BE_REPLACED

After creating the “absorbing and provocative” Version 2.0 and the “eminently lovable” Letters, Kashyap Raja returns to London with his new play Earth … END_OF_DOCUMENT_TOKEN_TO_BE_REPLACED