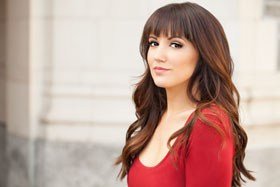 Club 11 London have announced an evening with US X-FACTOR and Broadway’s RACHEL POTTER on MONDAY 11th July 2016 at The Hippodrome.

Rachel Potter was born in New Orleans, raised in St. Petersburg, Florida, and spent her summers in Alabama- leaving her with strong southern roots. Her musical influences range from her rock-n-roller parents, her Baptist church upbringing, and her classical vocal training. She started out her professional career as a Christian recording artist, releasing her first self-written album when she was 15. While attending the University of Central a Florida, she performed at Walt Disney World in a few roles including Ariel, Belle and Nemo. After graduating with her degree in Advertising and Public Relations, she moved to New York City to pursue her love of musical theater. Soon after, she starred on Broadway in adaptations of The Addams Family, as Wednesday, Evita, as the Mistress, and Glinda in Wicked.

But Rachel always knew her heart belonged in country music. She recorded and released her debut EP, “Live The Dream,” in 2012 which showcased her diverse musical background. Just a year later, she left behind Broadway to find her place among the neon lights of Music City.

Potter went on to become a Top 12 finalist on season three of The X Factor, earning international praise for her rendition of Queen’s “Somebody to Love.” Her take on the classic tune, which has now reached over 32 million views on YouTube, is featured on her brand new album, Not So Black and White – released independently in 2015.

Get an up close & intimate experience like no other in London. Club 11 London brings the best artists and talents of the glittering West End, Broadway, pop, jazz, swing, soul and to the award winning Hippodrome 180 seat cabaret theatre. Check out other great shows bought to you by Club 11 London here: www.club11.london

Cirque du Soleil has announced the London run for one of its most critically acclaimed touring show KURIOS— Cabinet of Curiosities. Opening on 13th … END_OF_DOCUMENT_TOKEN_TO_BE_REPLACED

Ambassador Theatre Group Productions are delighted to announce a UK and Ireland Tour of the pantomime MOTHER GOOSE. The first of its kind to tour the … END_OF_DOCUMENT_TOKEN_TO_BE_REPLACED

The National Theatre’s new musical Hex returns to the Olivier theatre for Christmas, after its original 2021 opening was delayed due to covid. The … END_OF_DOCUMENT_TOKEN_TO_BE_REPLACED