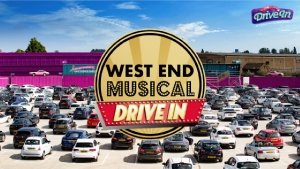 Much like their West End Musical Brunch, which sell out months in advance, West End Musical Drive-In is an immersive event where the audience ‘become the cast,’ singing and dancing along with the West End stars. Widening the scope of the audience, guests will now also be able to attend the event without a car, in groups of a maximum of five people – just bring your camping chairs and portable radio and enjoy!

Producer Chris Steward comments, ‘We’re so excited to be bringing so many Queens together for such a special performance. Although it’s a drive-in, in line with government guidelines, fans will also be able to attend in small groups even without a car and be right at the front of the stage. If last Saturday’s event is anything to go by the atmosphere is going to be electric!’


Global Creatures, the producer of Moulin Rouge! The Musical, has announced today that the UK premiere of the acclaimed show will begin performances at … END_OF_DOCUMENT_TOKEN_TO_BE_REPLACED

Be More Chill, the mind-bendingly, delightfully fun, hit musical is set to open at The Shaftesbury Theatre for a limited 10 week run from Wednesday 30 … END_OF_DOCUMENT_TOKEN_TO_BE_REPLACED

Producer Stacey Mindich has announced that the London production of Dear Evan Hansen, which won the 2020 Olivier Award for Best Musical, will reopen … END_OF_DOCUMENT_TOKEN_TO_BE_REPLACED