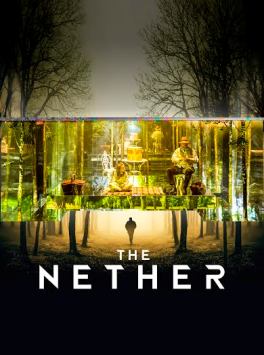 Sonia Friedman Productions, Scott M Delman and Tulchin Bartner Productions present the West End transfer of Jennifer Haley’s critically acclaimed, multi-award-winning The Nether. In a Headlong and Royal Court Theatre co-production directed by Jeremy Herrin, The Nether previews at the Duke of York’s Theatre from 30 January 2015, opens on 23 February and is booking for 12 weeks only to 25 April 2015.
Original cast members Amanda Hale (Morris), Stanley Townsend (Sims) and Ivanno Jeremiah (Woodnut) are joined by Zoe Brough and Isabella Pappas who will alternate the role of Iris as they did at the Royal Court. Final casting to be announced. Set designs are by Es Devlin, with costume designs by Christina Cunningham, lighting by Paul Pyant, compositions by Nick Powell, sound by Ian Dickinson and video design by Luke Halls.

There will be 100 tickets at each performance priced at £20.50, together with Royal Court pricing throughout the preview period, public booking for The Nether opens on 22 October 2014.
The Nether offers complete freedom – a new virtual wonderland providing total sensory immersion. Just log in, choose an identity and indulge your every desire. An intricate crime drama and a haunting thriller set in the year 2050, The Nether follows an investigation into the complicated, disturbing morality of identity in the digital world, and explores the consequences of making dreams a reality.

The Nether, winner of the 2012 Susan Smith Blackburn Prize, opened at the Royal Court Theatre in July 2014 where it played to sell-out audiences. Haley’s play received its world premiere in Spring 2013 produced by the Center Theatre Group at the Kirk Douglas Theatre in Los Angeles and won her an Ovation Award for Best Original Play and an L.A. Drama Critics Circle Award for Writing.

Jennifer Haley’s other writing includes Neighborhood 3: Requisition of Doom, which premiered at the Actors Theatre of Louisville at the 2008 Humana Festival, Breadcrumbs for the Contemporary American Theatre Festival and Sustainable Living written in the 2011-2012 CTG Writers’ Workshop and featured at the Ojai Playwrights Conference. Her play Froggy is in development with The Banff Centre and American Conservatory Theater. Haley’s plays have been developed at the Sundance Theatre Lab, the O’Neill National Playwrights Conference, the Lark Play Development Center, PlayPenn, Page 73 and the MacDowell Colony. She is a member of New Dramatists in New York City and lives in Los Angeles where she founded a writing collective called the Playwrights Union.

The Nether was the first play Jeremy Herrin directed for Headlong as Artistic Director. Previously he was Deputy Artistic Director of the Royal Court Theatre from 2009 until 2012 where his credits included No Quarter, Hero, Haunted Child, The Heretic, Kin, Spur of the Moment, Off the Endz, The Priory, Tusk Tusk, The Vertical Hour and That Face. Herrin directed the world premieres of Hilary Mantel’s Man Booker prize-winning novels Wolf Hall and Bring Up the Bodies in two parts for the Royal Shakespeare Company – the productions transferred to the West End in May 2014 and will open on Broadway in March next year. His other recent credits include Another Country, Uncle Vanya and South Downs for Chichester Festival Theatre all of which transferred to the West End, This House for the National Theatre, Absent Friends at the Harold Pinter Theatre and The Tempest and Much Ado About Nothing for Shakespeare’s Globe. Herrin’s production of David Hare’s The Absence of War will open at Sheffield Theatres in February 2015 prior to a UK tour.

Amanda Hale can currently be seen on stage in Jagged Edge’s production of Uncle Vanya at the St James Theatre. Her previous theatre credits include Wastwater and The City for the Royal Court, King Lear and Elektra for Headlong and the Young Vic, Eldorado at the Arcola, The Domino Heart at the Finborough, The House of Bernarda Alba for the Almeida Theatre, Our Class for the National Theatre, The Importance of Being Earnest for Oxford Playhouse, After Dido for the Young Vic and Pornography for Birmingham Rep/Traverse Theatre. Her extensive television credits include Dates, The White Queen, Ripper Street, Rev, Being Human, Spooks, Richard is My Boyfriend and Persuasion. Her film credits include The Invisible Woman, The Look of Love and Bright Star.

Stanley Townsend’s theatre credits include Tribes, The Alice Trilogy, Shining City, Under the Blue Sky and The Weir all for the Royal Court, King Lear, Phèdre, Gethsemane, Happy Now, Remember This and Guys and Dolls all for the National Theatre, Broken Glass at the Tricycle and in the West End and A View from a Bridge at the Lyceum, Edinburgh. His extensive television credits include the recent series of 24: Die Another Day opposite Kiefer Sutherland, as well as Quirke, The Shadow Line, Ripper Street, Toast, Sherlock Holmes, Ashes to Ashes, Hustle, Spooks, Fleming, Mad Dogs , Whistleblower, New Worlds, The Virgin Queen, Fresh Meat and Appropriate Adult. On film his credits include The Voices, One Chance, Happy Go Lucky and The Libertine.

Zoe Brough and Isabella Pappas made their professional stage debuts in The Nether at the Royal Court Theatre.