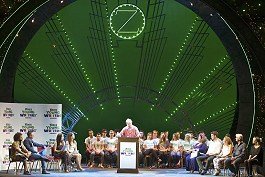 WICKED, the award-winning stage musical that tells the untold story of the witches of Oz, has announced the 5th year of the “prestigious Wicked Young Writers’ Award” (The Times), with entries now open.

The Award was established in 2010, spearheaded by bestselling author Michael Morpurgo, to recognise excellence in writing, encourage creativity and develop writing talent in young people between 5-25 years of age from all backgrounds and areas of the UK & Ireland.

Over 20,000 young people have since entered original and thought-provoking pieces of writing that consistently reflect the interests, concerns and deepest thoughts of young people, providing a first-look at the emerging voices of a new generation.

Championed by Patron Her Royal Highness The Duchess of Cornwall, the Award this year welcomes Cressida Cowell, the hugely popular author of the How to Train Your Dragon series, to join the panel of judges alongside Michael McCabe, UK Executive Producer of Wicked, and Jonathan Douglas, Director of the National Literacy Trust.

Cressida Cowell comments: “I am delighted to be asked to be a judge on the Wicked Young Writers’ Award, especially in this 5th anniversary year. As an ambassador for the National Literacy Trust it is wonderful to be involved in an award which celebrates young people’s writing and creativity.”

Jonathan Douglas, Director of the National Literacy Trust, says: “I’m thrilled that the Wicked Young Writer’s Award is back for a 5th year and I can’t wait to read stories and poems from some of the country’s most creative budding writers. The National Literacy Trust believes that taking part in writing challenges and awards can have a lasting impact on pupils’ attitudes, motivation and enjoyment, which in turn can help to boost attainment and support them to reach their full potential.”

Wicked’s UK Executive Producer, Michael McCabe, said: “Wicked is a musical with literary roots, based on Gregory Maguire’s best-selling book that re-imagined the fantastic characters first brought to life in The Wonderful Wizard of Oz. We are delighted and proud that the success of Wicked has enabled us to support the Wicked Young Writers’ Award for a 5th incredible year, and we are honoured to once again be working with the next generation of writing talent.”

Scott Wilson, 18, explained of winning the 15-17-year-old category: “I was pretty insecure about my writing and didn’t show it to anybody and this competition gave me such a confidence kick. I’d tell anyone that loves to write to enter, […] it really is such a confidence boost and I think that I write more than ever now because of it.”

Sophie Max, 17, who has been a finalist three times, and once a winner, exclaimed: “Being a finalist spurred me on and gave me confidence in myself as a writer. Having my writing published in the Anthology each year is a prized memento that I am so proud of; what an opportunity to get my stories in print!”

Pieces of writing can be submitted, either individually or as part of a school group, until Friday 18 April 2015. A shortlist of 100 entrants will see their poem or story published in the Wicked Young Writers’ Award Anthology and will be invited to a very special prize ceremony at the Apollo Victoria Theatre in London in July 2015. The overall winners from each category will win a VIP family experience to Wicked The Musical London, including an exclusive backstage tour and cast meet-and-greet, £50 worth of book/eBook tokens, plus £100 worth of books for their school library donated by Hachette Children’s Books.

The winner of the Sugarscape Fan Fiction Award will see their work published on Sugarscape.com and will be treated to lunch with the Sugarscape editor before their special Wicked experience. The school with the highest number of entries will receive a bespoke writing workshop at their respective school. Get involved today at WickedYoungWriters.com

The Award is separated into five categories between the ages of 5-25 and allows young people from across the UK and Ireland to enter a piece of writing on a theme or subject of their choice. The Sugarscape Fan Fiction Award is a separate 6th category, and fan fiction entries submitted by those aged 14+ will be considered for this category. Young people are free to submit entries written at home or at school, and teachers will also be encouraged to enter writing on behalf of their pupils through a schools’ entry form and an online Teachers’ Resource featuring exclusive video tips for inspiring and encouraging writing in the classroom. The final date for entries is Friday 18 April 2015. Schools and individuals can download entry forms, a Wicked Young Writers’ Award poster and find tips and videos about the Award at www.WickedYoungWriters.com