The creators of Wilf Goes Wild, an animated musical for KS1 students, have released a series of educational resources enhancing the pilot episode in response to the recent closure of schools across the UK. 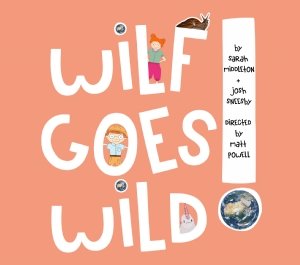 Written by Sarah Middleton (SHEWOLVES, Pinocchio at Nottingham Playhouse) and Josh Sneesby (Grammy Nominated for Amélie The Musical, One Man Two Guvnors) & directed by Matt Powell (on hope), the OnComm commended fifteen-minute musical follows the adventures of child explorers Wilf and Willow, as they learn about the world around them, meeting memorable characters along the way and teaching children they don’t have to leave the house to have an adventure! In this episode, Wilf and Willow venture to the Bottom of the Earth to save Marvin, their pet Giant African Land Snail.

To support home learning, the creatives behind Wilf Goes Wild have released a series of interactive activities, guidance and lesson plans to accompany the pilot episode, providing an enhanced learning experience to accompany the highly acclaimed, unapologetically musical pilot.

Alongside this, the Wilf Goes Wild team are inviting children to share their drawings, postcards & record messages to Wilf and Willow, which may even feature in future adventures! Plus, exciting #GoesWildFridays challenges will also launch online weekly from Friday 15th January on the Wilf Goes Wild Facebook page.

Director Matt Powell comments “As we find ourselves in a lockdown yet again, we wanted to find a way to help teachers, parents and guardians at this time. We’ve been overwhelmed by the positive response to Wilf Goes Wild over the past few weeks & are excited to be enhancing the experience with an array of creative & learning activities to do at home, teaching children they don’t have to leave the house to have an adventure!”

Wilf Goes Wild: The Mystery of the Missing Marvin stars Andrew Langtree (Groundhog Day, Olivier Nominated) as Mr. Plumpy, Shannon Rewcroft as Willow and, in his professional debut, recent Guildford School of Acting graduate Nathan Rigg as Wilf. The adventure is written by Sarah Middleton, with music by Josh Sneesby & is directed by Matt Powell.

The animated musical & a host of activities and packs can be accessed for free at www.wilfgoeswild.com. A BSL version is also available. Bespoke packages for schools including interactive Q+As are also available. #GoWildFridays begin Friday 15th January, and will be posted on Facebook.

About Wilf Goes Wild
WILF GOES WILD is an animated, educational musical following the adventures of explorer Wilf & his conservationist sister Willow. Through imagined expeditions, they learn about different parts of our world meeting a colourful cast of characters along the way. Wilf Goes Wild is unapologetically musical, promising to be entertaining, educational and epic!

Sir David Suchet makes his eagerly awaited return to UK stages in POIROT AND MORE, A RETROSPECTIVE this autumn (2021). Following a successful tour of … END_OF_DOCUMENT_TOKEN_TO_BE_REPLACED

Selladoor Worldwide is delighted to cheer on the full cast of BRING IT ON THE MUSICAL, who will be joining musical theatre and TV star Amber Davies as … END_OF_DOCUMENT_TOKEN_TO_BE_REPLACED