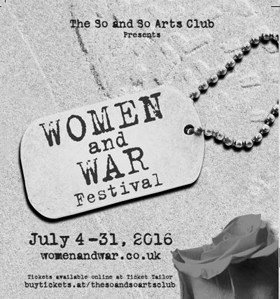 Women and War is a month-long festival examining the effect of warfare on women worldwide. Bringing together an extraordinary span of international work, and performers from all continents, the festival will showcase cutting-edge drama, comedy, dance, documentary film, photography, panel discussions and guest speakers drawn from the United Kingdom, United States, Spain, Iran, and Uzbekistan. Across the centuries, from the Crimean War, to WWII, through to the current conflict in Syria, Women in War tells the profoundly personal and yet universal stories of the role of women in war and the impact upon them during and after conflict, whether subjugated or subversive, victim or healer, protector or fighter. Opening on July 4th, the festival will be held at Frederick’s Place – a historic building in the heart of the City.

FESTIVAL HIGHLIGHTS
DRAMA, MUSIC AND DANCE
THE MARVELLOUS ADVENTURES OF MARY SEACOLE: Cleo Sylvestre stars as the Jamaican-Scottish women who set up her own field hospital in the Crimean War and was voted greatest Black Briton in 2004
MUNOJAT: Uzbekistan’s Orzu Arts Music and Dance presents a show based on classic and folkloric songs and dances from all over Central Asia. East Turkistan born singer/performer Rahima Mahmut joins for one night only to perform additional work.
NEPENTHE: An intense one-woman show written by Rachel Neuburger about Auschwitz’s notorious Block 24 brothel
VEILS: Award-winning playwright Tom Coash’s drama set against the dawning of the Arab Spring in Egypt

FILM
THIS IS EXILE: A screening of Emmy Award-winning director Mani’s documentary which follows child refugees from Syria into Lebanon. Produced by Julia Kirby Smith and Sian Kevill (the first female producer of Newsnight)
THE HEART OF AUSCHWITZ: A filmmaker goes on a search to discover how a beautiful handmade birthday book came to be within the walls of a concentration camp, who its makers were, and how it came to survive the horrors of war.

PHOTOGRAPHY EXHIBITIONS BY:
KEYMEA YAZDANIAN: An intimate look at women in private spaces in Iran
ALISON BASKERVILLE: Alison has focussed on the impact of conflict on those working and living in various areas of conflict around the world, including Afghanistan, Mali, Israel and Gaza

LITERATURE
HEIDI KINGSTONE – DISPATCHES FROM THE KABUL CAFÉ: Actor read excerpts from the acclaimed foreign correspondent’s memoir about her extraordinary experiences in Afghanistan between 2007 -2011 followed by an ‘In Conversation With’ session. This date is in partnership with the British and Irish Agencies Afghanistan Group, who present music and talks by Afghan women about their experiences in war-torn Afghanistan and coming to Britain as refugees.

CHARITY PANEL DISCUSSION
Supporting the work of the charity Women for Refugee Women (WRW), female refugees from around the world will perform the poem Set Her Free. The performance will be followed by a discussion led by the performers. All proceeds raised will be donated.

Festival Director and Executive Producer Sarah Berger said: “War has changed, but its effect on generations of women hasn’t. I wanted to use all kinds of art to give a voice to and examine the experience of women in war zones and to look not just at what happens to them during conflict but to tell the stories of their lives both before and after it. Women are so often betrayed as victims, but time and again it is them who build a new life out of the ashes. Women demonstrate huge resourcefulness, humour and courage in the face of sometimes horrifying adversity, and it feels like the right time to tell some of these stories.”

Further information and tickets at:
http://www.womenandwar.co.uk/

After creating the “absorbing and provocative” Version 2.0 and the “eminently lovable” Letters, Kashyap Raja returns to London with his new play Earth … END_OF_DOCUMENT_TOKEN_TO_BE_REPLACED