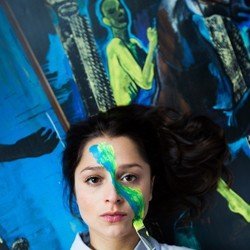 Set in Berlin, Moormaid is a thrilling chamber-play about self-destruction and rebirth that attempts to understand the fear currently gripping the European psyche, and the threats that may be posed by our own alienated youth. Bott’s inspiration for Moormaid came in 2014, when she discovered that two of her old classmates had travelled to Syria to fight for IS and didn’t come back. She was shocked by the banality with which the news was discussed and how this absurdity has now become a normality.

Moormaid tackles challenging and important issues that are often neglected: cultural differences, radicalisation, mental health, self-acceptance and isolation. It seeks to better understand the human beings caught up in extremism and the cages we build for ourselves that form our point of view.

Berlin. Eleven past eleven. Art teacher Melissa is about to do something drastic. Seeking a place to hide, her ex-pupil Mehdi interrupts her momentum. This meeting is the key to her questions as Melissa represents a depressed and fearful generation longing to break out. Medhi is the mirror of her darkest and greatest desires – he provokes and draws out all the suppressed aspects of her personality and brings them back to life, no matter how uncomfortable it becomes. Both embark on a turbulent journey, painting and battling their way through the past.

Bott comments, “The shocking news about my classmates haunted me until I took the decision to seek and better understand, rather than to judge in ignorance. As I sought the uncomfortable truths, the story of Moormaid took shape. The play tackles hugely complex themes, which we hear on the news all the time, but I’m interested in the humans behind it. Especially the radicalised youth. It’s really important to listen to their rage, and instead of being scared and letting the fear grow: face it and transform it. And never forget to ask: where is the human
behind all this?”

Alles comments, “I’m excited to be making my UK debut at Arcola Theatre and I’m looking forward to diving into this incredible new play. Melissa is a strong female character despite her struggles with her inner mind – she has built a cage around herself, like a dolls house that she has to live in. I hope we can make people wake up and see the cages they build and hopefully tear them into pieces.”

The full cast for this fantastic new play will be announced at the end of February. Moormaid has
been kindly supported by Arts Council England and Arcola Theatre.

Ambassador Theatre Group Productions are delighted to announce a UK and Ireland Tour of the pantomime MOTHER GOOSE. The first of its kind to tour the … END_OF_DOCUMENT_TOKEN_TO_BE_REPLACED

The National Theatre’s new musical Hex returns to the Olivier theatre for Christmas, after its original 2021 opening was delayed due to covid. The … END_OF_DOCUMENT_TOKEN_TO_BE_REPLACED

As it celebrates its 8th anniversary in the West End, The Play That Goes Wrong, the Olivier Award-winning smash hit announces an extension to the … END_OF_DOCUMENT_TOKEN_TO_BE_REPLACED

Producer Josh Andrews has today announced the lead cast for the UK tour of Peter James’ Wish You Were Dead: George Rainsford, will star as James’ … END_OF_DOCUMENT_TOKEN_TO_BE_REPLACED