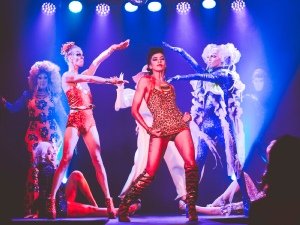 After touring the globe, the legendary cabaret YUMMY makes its London debut at the Underbelly Festival Southbank from 27 June (press night 2 July).

Based in Melbourne, Australia, YUMMY is a powerhouse cabaret of drag, dance, circus and live music that has been serving smashing hit events around the world since 2015 including the Edinburgh Fringe (‘A sexy, transgressive, genderfluid, fashion-conscious non-stop party.’ – The Scotsman). Known for its cult following and wild aesthetic, YUMMY has become legendary in the underground club cabaret scene and now presents feature-length shows that transverse both entertainment and contemporary performance art.

YUMMY has a unique sense of gender balance and fluidity that reflects a changing cultural attitude towards gender identity and is recognised for its incorporation of women in drag spaces.

YUMMY has carved a name for itself by blending absurd and outrageous drag conventions with fascinating and complex contemporary choreography. Winners of ‘Best Production’ and ‘Best Ensemble’ (Cabaret) at the 2018 Green Room Awards, YUMMY has become synonymous with breath-taking drag, music, circus, and burlesque. The show is outrageous as it is avant-garde and is known for its refreshing new style.

Come and join the stars of YUMMY as they lead a new wave of outrageous, joyful, and innovative cabaret.