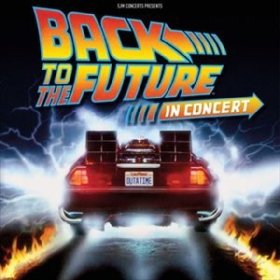 Experience the blockbuster film like never before accompanied by Alan Silvestri’s iconic score conducted live by Czech National Symphony Orchestra playing in sync with the film projected on the big screen. Back to the Future in Concert is coming to the UK on a nationwide tour in April 2019.

Power up your DeLorean… recharge your flux capacitor… and get ready to celebrate this unforgettable movie classic as you’ve never seen and heard it before! Back to the Future is the 1.21-gigawatt blockbuster that topped the 1985 box office chart, spawned two wildly successful sequels and stamped an enduring imprint on pop culture. In this time-traveling coming-of-age story, Marty McFly (Michael J. Fox) suddenly finds himself transported back to 1955 where he struggles to change the destiny of his parents (Lea Thompson, Crispin Glover), rescue an eccentric friend (Christopher Lloyd) from terrorists, and solve an alternative-plutonium crisis – all while trying to ensure he has a future to get back to!

Now, fans old and new will experience the thrill of Back to the Future like never before – on an HD screen with a full symphony orchestra performing Alan Silvestri’s dazzling musical score live in synch with the movie. Audiences will also be in for an exclusive treat: approximately twenty minutes of brand new music added by award-winning composer Silvestri to the film’s score especially for these unique live orchestra presentations.