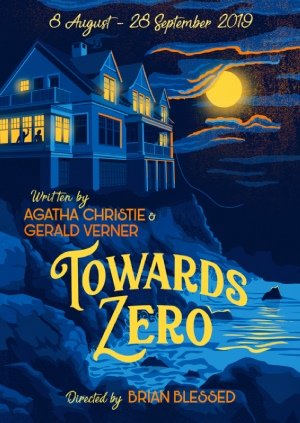 Casting is announced for a new production of Agatha Christie’s classic whodunit thriller Towards Zero, to be directed by Brian Blessed at The Mill at Sonning.

Five puzzled faces turned to him. There had been a murder – a brutal murder – of an invalid matriarch as she lay in bed. There had apparently been no premeditation on the part of her family and friends who had gathered at her home for their regular yearly visit. No one seemed to have had any reason for killing her, nor did anyone gain by her death. Inspector Battle paused. “It’s Zero Hour now,” he snapped.

Packed with suspense, brooding atmosphere and outrageous twists and turns, Towards Zero will run for 8 weeks from Thursday 8 August – Saturday 28 September 2019.

Towards Zero is a family affair, the latest in a line of Christie thrillers directed each summer by Brian Blessed at The Mill, with his wife, Hildegard Neil and daughter, Rosalind Blessed, in the company.

The combination of Christie and Blessed has proved a winning formula for The Mill, helped by the special relationship that Brian had with the Queen of Crime. He met and worked with her when he was a young actor at Nottingham Repertory Theatre. Their friendly conversations informed Brian about how she would have liked to see her plays directed. She told Brian that Towards Zero was acclaimed by the novelist Rupert Graves as by far her best and most dramatic novel, and in 1956, Gerald Verner adapted it into a play.

Christie explains in her own words the meaning of the intriguing title: “When you read the account of a murder, real or imagined, you usually begin with the murder itself,” said the big Inspector Battle. “That’s all wrong. The murder belongs a long time beforehand. A murder is the culmination of a lot of different circumstances all converging at a given time at a given point. It’s Zero Hour.”

Set majestically on the banks of the River Thames, the Mill at Sonning Theatre is celebrating more than 30 years of entertainment. Uniquely, as the only dinner theatre in the United Kingdom, it has gained unrivalled praise both nationally and internationally. All tickets include a delicious two-course meal in the restaurant before the show.

Rosalind Blessed wrote, produced and performed in her own play The Delights of Dogs and the Problems of People at The Courtyard Theatre. She played Rosie Bailey in The Ballard of Robin Hood (Southwark Playhouse), Goneril in King Lear and Emilia in Othello both for the Guildford Shakespeare Company. Prior to that she played Tamora in Titus Andronicus (Arcola Theatre).

Patrick Myles was in Tales of the Unexpected, also directed by Brian Blessed, at The Mill at Sonning. Theatre work includes Infinitum (Les Enfants Terribles), Much Ado About Nothing (Shakespeare in the Squares), Henry VI Parts One, Two and Three (Shakespeare’s Globe), Bush Bazaar (Bush Theatre), The Hairy Ape (Southwark Playhouse), The Black Diamond (Punchdrunk).

Bethan Nash returns to The Mill at Sonning where she was Eliza Dolittle in My Fair Lady and Tracy Lord in High Society. Graduating from Bristol Old Vic Theatre School, Bethan received The Peter O’Toole Prize and was the recipient of the Julian Slade Music Award.

Hildegard Neil also appeared in The Holly and The Ivy, Enchanted April and The Hollow at The Mill at Sonning. In a long and successful career, highlights include two and a half years at the Liverpool Everyman, where she played, among many, the title role of Hedda Gabler, Lady Macbeth (Greenwich Theatre), Gertrude in Hamlet, Elanor of Acquitaine with Brian Blessed in The Lion in Winter.

George Telfer returns to Sonning after last summer’s production of The Unexpected Guest and Spider’s Web and The Hollow the two summers before.George has done a number of one man shows, two of which he wrote himself (about John Gielgud and Richard Burton) and two which were written for him (about Graham Chapman and Prince Philip).

Kate Tydman returns to The Mill at Sonning where she last appeared in The Unexpected Guest. She was in The Entertainer (Kenneth Branagh Theatre Company); Murder On The Orient Express (Twentieth Century Fox), Love Me Tender (UK Tour), The Lion, The Witch & The Wardrobe (Rose Theatre, Kingston) and Macbeth (Kenneth Branagh Theatre Company, New York).

Noel White made his Mill at Sonning debut in last year’s production of The Hollow. His other theatre roles include Julius Caesar, King Lear, Macbeth and Hamlet (Guilford Shakespeare Company).

Duncan Wilkins trained at The Royal Central School of Speech and Drama and the Moscow Arts Theatre. Theatre credits include: Romeo & Juliet (MokitaGrit, The Chocolate Factory), Tales From Behind the Twitching Curtain (Arcola Theatre/Soho Theatre), The Delights of Dogs and the Problems of People (The Courtyard & Edinburgh Festival), The Return of the Exile (The Yard Theatre; Athinais Theatre, Athens).

Brian Blessed OBE (Director)
Brian Blessed is an actor known for his booming voice and his roles in Z-Cars, I, Claudius, Blackadder, and Flash Gordon. His West End roles included both Old Deuteronomy in the original cast of Cats and he originated the role of Baron Bomburst for the London Palladium stage musical version of Chitty Chitty Bang Bang. He directed Agatha Christie’s Spider’s Web and The Hollow at The Mill at Sonning. He was appointed Officer of the Order of the British Empire (OBE) in the 2016 Birthday Honours for services to the arts and charity

Dinah England (Set Designer)
Previous designs for The Mill at Sonning include: Time of My Life, A Night in Provence, The Heiress, Love’s a Luxury, Plaza Suite, The Odd Couple, I Ought to be in Pictures, Guilty Secret, Room Service Included and California Suite.

Towards Zero
by Agatha Christie
Directed by Brian Blessed