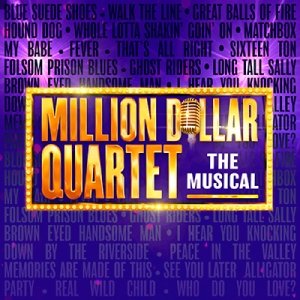 Be prepared for a Whole Lotta Shakin’ Goin’ On… Back by popular demand following huge success on Broadway and the West End, the Tony Award winning musical Million Dollar Quartet returns to the UK and Ireland.

This worldwide smash hit musical, inspired by the famous recording session that brought together rock‘n’roll icons Elvis Presley, Johnny Cash, Jerry Lee Lewis and Carl Perkins for the first and only time, will embark on an extensive tour of the UK and Ireland from March 2020.

Re-joining the production as the ‘Father of Rock’n’Roll’ Sam Phillips, is national treasure Peter Duncan. Following rave reviews for his performance in the musical’s 2017 UK tour, the Olivier Award nominee and former Blue Peter presenter returns to the stage in 2020.

Peter Duncan, said: “I’m delighted to be playing the role of Sam Phillips in the greatest rock’n’roll show ever and to be sharing the stage each night with four great performers as Elvis, Carl Perkins, Johnny Cash and Jerry Lee Lewis.”

Further casting will be announced shortly.

On December 4, 1956, history was made when these four star musicians gathered at Sun Records in Memphis, the studios of legendary record producer Sam Phillips, for what would be one of the greatest jam sessions of all time.

Million Dollar Quartet brings that legendary night to life, with its extraordinary story of broken promises, secrets, and the once-in-a-lifetime celebration of four acclaimed recording artists.

The stage production is written by Colin Escott and Floyd Mutrux, directed by Olivier nominated Ian Talbot OBE, and includes designs by David Farley, lighting by David Howe and sound by Ben Harrison. The UK tour is produced by Mark Goucher and Laurence Myers.

Don’t miss your chance to be a fly on the wall of fame and history, and join in the celebration of this red-hot rock ‘n’ roll band for one unforgettable night!

He became best known for his daredevil approach to life when he joined the Blue Peter team in 1980. He ran the first London Marathon in just over three hours, fought a sumo wrestler in Japan, cleaned the clock face of Big Ben and escaped from a forest fire in Canada. He was awarded a Gold Blue Peter badge for his volunteer work as leader of the UK’s half a million scouts.

Peter began his career on stage joining Olivier’s National Theatre and spent the 70s working exclusively as actor. He has appeared in many musicals including Barnum, Me and My Girl and The Little Tramp. In 1995 he was nominated for an Olivier Award as Best Actor in a musical playing Denry Machin in The Card. Recent stage credits include Charlie Peace at Nottingham Playhouse, Birdsong on UK Tour, and Macbeth and Fantastic Mr Fox at Regent’s Park Open Air Theatre.

In his own series Duncan Dares he entertained with stunts such driving across the Irish Sea in a VW Beetle, walking the high wire and lying on a bed of nails with a tarantula and a python on his chest. In 2001 he produced a six-part documentary series called Travel Bug for the BBC in which he, his partner Annie and their four children backpacked their way around the world.

His work as an actor on TV has included The Childhood Friend, Sons and Lovers, Renoir My Father, Warship, Fathers and Families, Sam, Fallen Hero, Survivors, King Cinder, Oranges and Lemons, The Flockton Flyer, Space 1999. His feature film credits include Stardust, Quilp, and a famous cameo in Flash Gordon when he was bitten by a tree monster and died.

Ian Talbot (Director) was Artistic and Managing Director of the Open Air Theatre in Regent’s Park until 2008, and has been associated with the company since 1971. In the 2007 New Year’s honors Ian was awarded the O.B.E. for his services to the arts.

For Regent’s Park he has directed: Babes In Arms; The Fantasticks; Lady Be Good; The Card; Kiss Me Kate; A Funny Thing Happened On The Way To The Forum; Oh, What A Lovely War; High Society; H.M.S. Pinafore; (all nominated for Olivier awards), The Pirates Of Penzance (Olivier nomination for Best Director 2000), Much Ado About Nothing; Androcles And The Lion; Look Here Old Son; The Two Gentlemen Of Verona; Twelfth Night; A Midsummer Night’s Dream; A Connecticut Yankee; The Comedy Of Errors; Paint Your Wagon; Gentlemen Prefer Blondes; The Music Man; Where’s Charley?; Camelot and the return of Lady Be Good and The Boyfriend.

Colin Escott (Co-Author) is the author of Good Rockin’ Tonight: Sun Records and the Birth of Rock ‘n’ Roll, the first in-depth account of the Sun Records story. His book, Hank Williams – The Biography, has been adapted into the movie I Saw the Light, starring Tom Hiddleston and Elizabeth Olsen. His multi-CD box set, The Complete Hank Williams, won a Grammy, and another of his productions, B.B King – King of the Blues, was nominated for a Grammy.

Further tour dates and venues will be announced in due course.