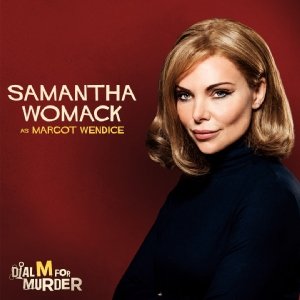 A brand new production of the classic thriller, Dial M for Murder, tours the UK in 2020, having opened at Richmond Theatre on January 14th 2020. The genre-defining thriller – based on Frederick Knott’s stage and screenplay, made world-famous by Hitchcock’s iconic 1954 film is directed by Anthony Banks. Samantha Womack takes over the role of Margot from Sally Bretton from the 14th April, in Milton Keynes where she tours with the company to Birmingham, Cardiff, Leicester, Sheffield, Liverpool, Mold, Brighton, Shrewsbury and Salford. Her run concludes in Northampton on June 27th.

TV and stage favourite, Tom Chambers, (Top Hat, Strictly Come Dancing) stars as the charismatic and manipulative Tony Wendice, a jaded ex-tennis pro who has given it all up for his wife Margot, played by Samantha Womack * (The Girl on the Train, The Addams Family, Eastenders). When he discovers she has been unfaithful his mind turns to revenge and the pursuit of the ‘perfect crime’. Christopher Harper (Coronation Street, Strangers on a Train) performs in the dual roles of Captain Lesgate and Inspector Hubbard and Michael Salami (Hollyoaks) as Max Halliday, Margot’s lover.

Her television credits include the leading roles of: Tanya in three series of Mount Pleasant, Ingrid in Home Again, Ruth in Babes in the Wood, Imogen in Imogen’s Face and Mandy in the hugely popular Game On. Samantha has also starred in Forgiven, The Last Detective, Strange, Judge John Deed, Liverpool 1, Pie in the Sky and The Grimleys. She also appeared in Silent Witness on BBC1. Samantha’s film credits include the box-office-breaking Kingsman: The Golden Circle, Kingsman: The Secret Service, One Night in Istanbul, Dead Man’s Cards, Lighthouse Hill, The Baby Juice Express, Up N Under and Breeders. Theatre credits include: The Girl on the Train (UK tour); The Addams Family (UK tour); Hope (Royal Court Liverpool); The Lincoln Centre’s production of South Pacific in the lead role of Nellie Forbush (Barbican and UK tour); Michael Grandage’s Guys and Dolls alongside Patrick Swayze (Piccadilly Theatre); Earth & Sky (UK tour) and Peter Hall’s production of Harold Pinter’s Betrayal (Theatre Royal Bath).

Michael Salami is Max Halliday. Michael Salami is a multi-award-winning actor. Born in America and raised in London, Salami discovered his passion for acting in 2007. Salami made his first on stage appearance at Oval Theatre in 2010 and has since then performed at The Old Vic, Soho Theatre, Lyric Hammersmith, Southwark Playhouse and Theatre503. Salami studied at Stella Adler Studio of Acting in New York graduating in 2016 and since then has appeared in Hollyoaks; Catastrophe; The Temple and Magic Hour. His leading role in Just A Couple has landed him a number of nominations and awards such as a Screen Nation Award for Best Actor. Just A Couple is now in full development with Channel 4.

Dial M For Murder is produced by Simon Friend and Gavin Kalin.