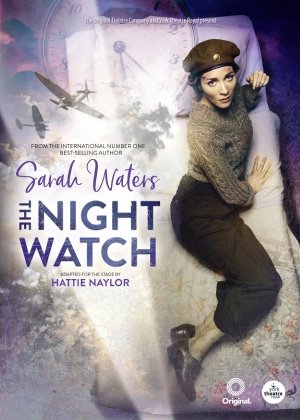 The Original Theatre Company and York Theatre Royal present, from the international number one best-selling author Sarah Waters, THE NIGHT WATCH, adapted by Hattie Naylor (Ivan And The Dogs, Going Dark, As the Crow Flies and Bluebeard). First performed in 2016 at Manchester’s Royal Exchange, the first revival of THE NIGHT WATCH opens at Devonshire Park Theatre, Eastbourne on 22 August, touring the UK until 23 November 2019.

Set in London in the 1940s, we follow the lives and loves of people recovering from the chaos of war. THE NIGHT WATCH is a tender, tragic and beautifully poignant portrait of four ordinary people caught up in the aftermath of an extraordinary time.

Sarah Waters (Tipping the Velvet, The Paying Guest and The Little Stranger) has sold over 2 million novels in England and 4 million worldwide, of which half a million were THE NIGHT WATCH. Olivier-nominated playwright Hattie Naylor creates a gripping and theatrically inventive adaptation of this great modern novel. From the team that brought you Birdsong, The Habit of Art and The Importance of Being Earnest, this eagerly anticipated brand new production will tour for the first time.

Mara Allen graduated from RADA this year. THE NIGHT WATCH will be her first UK tour and debut since graduating.

Louise Coulthard was recently nominated for Best Actress at the 2018 Off West End Awards for her performance in Cockamamy, which she also wrote. Cockamamy also won the Lustrum Award for Outstanding New Play at The Edinburgh Fringe in 2017 and transferred to London in 2018. It is now in development for television. Her other theatre credits include The Importance of Being Earnest (UK Tour for the Original Theatre Company), House and Garden (The Watermill Theatre) and Dreams of Home (Theatre Royal Stratford East).

Malcom James recently played Paravicini in The Mousetrap (St Martin’s Theatre). His other theatre credits include The Woman in Black (Fortune Theatre and UK Tour), Birdsong (UK Tour for the Original Theatre Company) and Equus (UK and Ireland Tour). His television credits include: Beyond Reasonable Doubt (CNN), Coronation Street, Heartbeat, The Bill and Crossroads (ITV). He recently starred in the film My Dinner with Hervé (HBO).

Florence Roberts most recently appeared in A Hero Of Our Time (International Tour), Losing Venice (Orange Tree Theatre), Booby’s Bay (Finborough Theatre in association with Bristol Old Vic). Her television credits include Holby City (BBC), This Is A Relationship; Dan?, which won the Shortlist Shorts at Raindance Film Festival, and Life in Black, which won Best Web/TV Series at London Independent Film Awards.

Izabella Urbanowicz’s theatre credits include After The Dance (Theatre by the Lake), Miss Julie (Theatre by the Lake / Jermyn Street), A Haunting (The Vaults), What You Will: Pop Up Shakespeare (Shakespeare’s Globe) and Truth And Reconciliation (Royal Court Theatre). Her television and radio credits include Spotless, Titanic, Doctors (BBC), The Corrupted and The Archers (BBC Radio 4).

THE NIGHT WATCH is directed by Alastair Whatley and designed by David Woodhead, with lighting by Nic Farman, sound by Dominic Bilkey, casting by Ellie Collyer-Bristow CDG, music by Sophie Cotton and movement direction from Lucy Cullingford.

The tour is produced by The Original Theatre Company and York Theatre Royal.
www.originaltheatre.com

A packed line-up of 34 hit West End shows has been unveiled so far ahead of this year’s West End LIVE, a free and unticketed celebration of London’s … END_OF_DOCUMENT_TOKEN_TO_BE_REPLACED

Based on the true story behind the escape from the infamous Stalag Luft III prisoner of war camp, Tom, Dick and Harry (the names of the three tunnels … END_OF_DOCUMENT_TOKEN_TO_BE_REPLACED