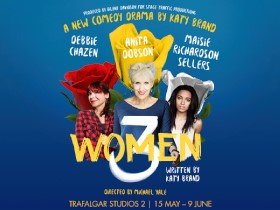 3Women, the debut play by the award-winning comedian and writer Katy Brand, will premiere at Trafalgar Studios 2, starring the celebrated screen and stage actress Anita Dobson (Eleanor), alongside Debbie Chazen (Suzanne), Maisie Richardson-Sellers (Laurie), and Oliver Greenall (Waiter). Running from 15th May to 9th June 2018, with press night on 18th May, 3Women explores the relationships between three generations of the same family, brought together in one hotel room, in a darkly comic and pertinent exploration of what it means to be a woman.

Katy Brand said, “3Women is a play I have been hoping to write for several years, but now that feminism and women’s rights are at the very forefront of the global conversation, I wanted to really explore those issues from the point of view of three generations of women, and how they interact and intersect within the same family. These movements are not so straightforward as the media would sometimes have us believe but wrapped up in the chaotic and all-too-human lived experiences of real women, from the Suffragettes to those who currently campaign for transgender rights. We are all simply trying our best to be ‘modern women’ (whatever that means), making mistakes, and blundering on as best we can!”

Raise a glass to female family bonding and buried resentment!

From generation to generation, Mother to Daughter, this female-led play explores what it means to be a woman in the 21st Century and the consequences of the generational gap on our attitudes, cultural expectations and family dynamic. From wedding celebrations to relationship disillusionment, 3Women is razor-sharp, funny and caustically irresistible.

This hilariously frank and original debut brings our three women and their own very different identities and opinions into one hotel suite for a single night of redemption. What will be revealed?

3Women is directed by Michael Yale, with designs by Zahra Mansouri, lighting by Nic Farman, and is produced by Stage Traffic Productions.