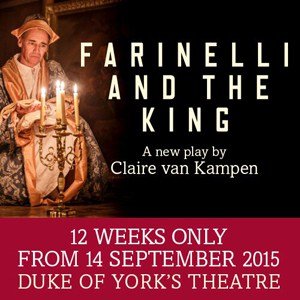 Following a sold out run at the Sam Wanamaker Playhouse, the critically-acclaimed Shakespeare’s Globe production of Farinelli and the King transfers to the West End, at the Duke of York’s Theatre, for a strictly limited run.

Depressed and plagued by insomnia, King Philippe V of Spain lies awake in his chamber. The Queen, desperate to find a cure, hears of Farinelli – a castrato with a voice so divine it has the power to captivate all who hear it. Even Philippe is astonished when Farinelli sings, and begs him to stay. But will Farinelli, one of the greatest celebrities of his time, choose a life of solitude over fame and fortune in the opera-houses of Europe? And will his extraordinary talent prove to be a curse rather than a blessing?

Sonia Friedman Productions and Shakespeare’s Globe join forces once again (Richard III and Twelfth Night) to bring this inspiring true story – featuring many of the arias first sung by Farinelli in the 1730s and live music played on Baroque instruments – into a transformed Duke of York’s Theatre, lit almost exclusively by the glow of candlelight.