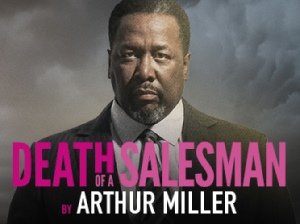 Elliott & Harper Productions and Cindy Tolan are thrilled to announce the transfer of the highly acclaimed, sold-out Young Vic production of Arthur Miller’s Death of a Salesman to the Piccadilly Theatre from 24th October 2019 to 4th January 2020, with Press Night on Monday 4th November 2019.

Following her recent award-winning successes on Company and Angels in America, Marianne Elliott co-directs Death of a Salesman with Miranda Cromwell, who worked as Associate Director on both shows. Together, they bring a unique vision to one of the greatest plays of the twentieth century, seen through the eyes of an African-American family.

Wendell Pierce, who is best known for his roles in The Wire and Suits, will reprise his revelatory performance as Willy Loman with the Olivier award-winning Sharon D. Clarke reprising her heart-rending performance as Linda Loman. Full cast to be announced.

Arthur Miller (1915-2005) was born in New York City and studied at the University of Michigan. His plays include All My Sons, Death of a Salesman, The Crucible, A View from the Bridge, After the Fall, Incident at Vichy, The American Clock, Broken Glass, Mr. Peters’ Connections, and Resurrection Blues. He received the Pulitzer Prize for Drama in 1949. Other works include the novel Focus, the screenplay The Misfits, the memoir Timebends, and texts for the books In Russia, In the Country, and Chinese Encounters, in collaboration with his wife, photographer Inge Morath. Newly published collections include Collected Essays and Presence: Collected Stories.