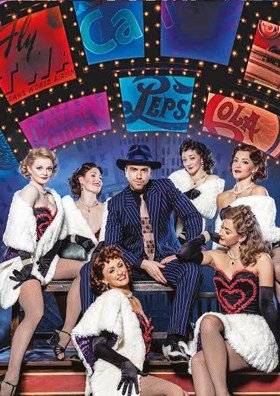 Casting is announced for Guys and Dolls which will tour throughout the UK, opening at the Liverpool Empire on 16 March 2016. Cast includes Richard Fleeshman (Coronation Street, Ghost the Musical, Call the Midwife) as Sky Masterson, Maxwell Caulfield (Grease 2, Emmerdale, The Colbys) as Nathan Detroit, Louise Dearman* (Wicked, Evita) as Adelaide and Anna O’Byrne (Love Never Dies) as Sarah Brown.

Nathan Detroit is desperate: he needs money for an illegal dice game, and he needs it fast. Not to mention a 14-year engagement with nightclub singer Miss Adelaide, whose patience is finally running out. Enter notorious gambler Sky Masterson, a guy who can never turn down a bet, and straight-laced missionary Sarah Brown, a doll with a heart of ice. Nathan’s wager is that Sky has to romance Sarah by taking her to Havana for dinner and in return he’ll provide a dozen ‘sinners’ for Sarah’s mission. Surely this is one bet Nathan absolutely can’t lose?

A joyous and vibrant celebration of Prohibition-era New York, Guys and Dolls first premiered on Broadway in 1950 and captured the optimism and energy of post-World War Two America. This hugely popular and multi award-winning musical, based on the colourful stories by American journalist Damon Runyon renowned for his vivid fictional depictions of the gamblers, hustlers and nightclub singers of New York, features some of Broadway’s greatest musical numbers including ‘My Time of Day’, ‘Luck be a Lady’ and the show-stopping ‘Sit Down You’re Rockin’ the Boat’. Guys and Dolls is directed by Gordon Greenberg with choreography by Cuban dancer and former Royal Ballet star Carlos Acosta and Andrew Wright whose credits include Chichester Festival Theatre’s Singin’ in the Rain.

Maxwell Caulfield (Nathan Detroit) Theatre credits include the Tony Award-winning production of The Elephant Man and the National Theatre’s transfer of An Inspector Calls on Broadway. In the UK he has starred in the UK touring productions of Singin’ in the Rain, Bedroom Farce and The Rocky Horror Show, as well as starring as Billy Flynn in the West End production of Chicago. In recent years Maxwell has starred several long-running UK television series including Emmerdale and Casualty. Other television credits include the hit US shows Modern Family, NCIS and Castle, as well as The Parade and the global hit series The Colbys. Film credits include the lead opposite Michelle Pfeiffer in Grease 2, The Boys Next Door, Empire Records and The Real Blonde.

Louise Dearman* (Miss Adelaide) played Sarah Brown in the hit Donmar Warehouse production of Guys and Dolls in the West End. Her extensive theatre credits include Kiss Me Kate (Royal Albert Hall), The Water Babies (Leicester Curve), the first actor to play both Elphaba and Glinda in Wicked (Apollo Victoria), Evita (UK Tour), Grease (UK Tour and West End) and Joseph and The Amazing Technicolor Dreamcoat (UK Tour). As a recording artist Louise has released 3 albums – You and I, Here Comes the Sun and It’s Time.
*Louise will be playing all venues up until and including Bord Gáis Energy Theatre, Dublin.

Director Gordon Greenberg has directed plays and musicals at major theatres across America and Europe, written for television and stage, and runs the musical theatre program at The New Group in New York, where he is based. He directed the current revival of Guys And Dolls for Chichester Festival Theatre, which is now running in London’s West End. He will direct his adaptation of Irving Berlin’s Holiday Inn on Broadway in October, 2016 at Studio 54 for Roundabout Theatre Company and Universal Pictures Stage Productions. Other directing/writing includes the Drama Desk Award winning production of Working (which he adapted with Stephen Schwartz and Lin-Manuel Miranda) at 59 E 59 in New York, after productions at the Broadway Playhouse in Chicago, Asolo Rep and The Old Globe in San Diego. He directed and adapted the critically acclaimed New York revival of Jacques Brel Is Alive And Well… (Drama Desk, Drama League, Outer Critics Award noms), the new stage adaptation of Tangled for Disney, Johnny Baseball for Williamstown Theatre Festival, Pirates! Or Gilbert and Sullivan Plunder’d (created with Nell Benjamin, Paper Mill et al), the new production of Yentl, Band Geeks! (recipient of NEA and NAMT grants for production at Goodspeed), The Baker’s Wife (revised with Stephen Schwartz for Goodspeed and Paper Mill), Disney Fantasy (with Neil Patrick Harris & Jerry Seinfeld), 1776 (Paper Mill), Floyd Collins (Signature), Jesus Christ Superstar (revised with Stephen Oremus), etc. Current projects include co-writing Emerald City Music, an original movie musical for Nickelodeon Television and Scramble Band, an original movie for the Disney Channel, writing The Single Girls Guide (a new musical updating Jane Austen’s Emma to 1964) for the Fifth Avenue Theatre in Seattle (developed at Dallas Theatre Center), adapting and directing The Secret of My Success for Universal Pictures Stage Productions, and writing Point-A-Pitre, a NYSCA commission for The New Group, with Kirsten Childs. Born in Texas and raised in New York, Greenberg performed in his first Broadway show at age 12. He attended Stanford University and NYU Film School before joining J. Walter Thompson Worldwide for a stint as a producer/director of commercials. He then moved back into theatre — first performing on Broadway and on television and soon directing and writing. He is a member of the Stage Directors & Choreographers Society, The Writers Guild of America, The Dramatists Guild, and the Lincoln Center Theatre Directors Lab.

Choreographer Carlos Acosta trained at the National Ballet School of Cuba, and has danced as a principal with English National Ballet, National Ballet of Cuba and Houston Ballet. He is a Principal Guest Artist with The Royal Ballet and appears worldwide with companies including ABT, Paris Opera Ballet, Kirov, Bolshoi and Australian Ballet, and has created roles in contemporary ballets both with The Royal Ballet and internationally. Acosta was instrumental in taking The Royal Ballet on tour to Havana, and starred in the Company’s performances of Romeo and Juliet at The O2 Arena dancing Romeo opposite Tamara Rojo as Juliet. He has staged several shows across Europe featuring both classical and contemporary repertory, including his own choreography and the work of choreographers from his native Cuba. Shows for Sadler’s Wells include the semi-autobiographical Tocororo and Carlos Acosta with Guests from The Royal Ballet for which he won the Olivier Award for Outstanding Achievement in Dance for his performances. He recently staged a new production, Classical Selections, at the Coliseum, and produced and choreographed a new production of Don Quixote for the Royal Ballet. Screen credits as an actor include the feature films New York, I Love You and Day of the Flowers.