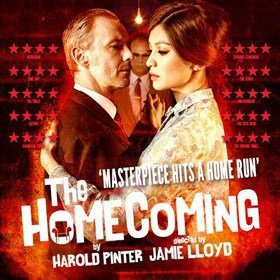 The Jamie Lloyd Company returns to the West End with Harold Pinter’s enigmatic masterpiece, The Homecoming, in the 50th anniversary year of the multi award-winning modern classic.

Widely regarded as Pinter’s finest play, the dangerous and tantalisingly ambiguous world of The Homecoming is a crackling hotbed of visceral tension. Celebrated as one of the leading interpreters of Pinter’s work, director Jamie Lloyd has assembled an impressive cast in what promises to be a dynamic production.

The Homecoming is a unique contemporary masterpiece of the 20th Century. This 50th anniversary production will continue The Jamie Lloyd Company’s unparalleled reputation for presenting compelling drama that sparks passionate debate.

When Teddy returns from America to introduce his wife Ruth to his family in London, they discover a claustrophobic and brutal household where his father Max, brothers Lenny and Joey and uncleSam live in a state of mutual loathing and festering resentment. Theirs is a motherless, compassionless and lawless home where Ruth immediately becomes the centre of attention. Pinter’s sinister masterpiece simmers with suspense and rings with savage humour as Ruth navigates her way between the roles of predator and prey in an incisive battle of wills.