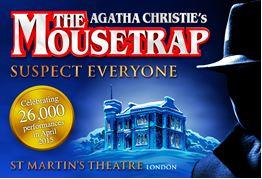 Agatha Christie’s The Mousetrap celebrated 26,000 performances at the St Martins Theatre in London on Monday 6 April. The production, which originally opened in 1952 starring the late Richard Attenborough and his wife Sheila Sim, became the world’s longest-running stage production in 1958 exceeding the run of Chu-Chin-Chow after 2,239 performances.

As part of the 60th anniversary of The Mousetrap, the first UK tour took to the road in 2012 and has now been seen by over 600,000 people across more than 600 performances. Breaking box office records in many of the theatres around the country, the beloved murder mystery will begin the 2015 leg of its tour at His Majesty’s Theatre in Aberdeen on 28 April. The show will visit over 25 venues across the UK including a return visit to The Marlowe Theatre, Canterbury from 1 – 5 September where the record-breaking tour began back in September 2012.

Mousetrap Productions has also licensed 60 productions of The Mousetrap worldwide to mark the 60th year, and many of these have also broken their records, from Cape Town to Philadelphia, Singapore to Sydney. During this period the world’s longest-running show has been seen in every continent, with professional productions in Australia, China, Korea, Turkey, South Africa, Russia, Czech Republic, Hungary, France, Germany, Holland, Italy, Poland, Spain, Scandinavia, Venezuela, and across the United States and Canada.

Performances
Monday to Saturday at 7.30pm
Matinee performances at 3.00pm on Tuesday and 4.00pm on Saturday