US star Katharine McPhee (Smash) will reprise the role of Jenna having played her on Broadway in 2018 and will appear alongside Emmy-nominated film and TV actor Jack McBrayer, who is best known for playing Kenneth in the multi-award winning US comedy series 30 Rock and will be making his West End debut in the role of Ogie.

Rehearsals are now underway ahead of performances beginning on 8 February and an official opening night on 7 March at London’s Adelphi Theatre. Currently playing its third hit year on Broadway, Waitress will bring with it an all-female lead creative team – a West End musical first.

Meet Jenna, a waitress and expert pie-maker who dreams of a way out of her small town and rocky marriage. Pouring her heart into her pies, she crafts desserts that mirror her topsy-turvy life such as “ The Key (Lime) to Happiness Pie” and “Betrayed By My Eggs Pie.” When a baking contest in a nearby county — and a satisfying run-in with someone new — show Jenna a chance at a fresh start, she must find the courage to seize it. Change is on the menu, as long as Jenna can write her own perfectly personal recipe for happiness.

Shaun Prendergast (Old Joe) has had many notable roles across film, television, theatre and radio. He is well known to television audiences for roles such as DS Holt in EastEnders, Robert Bain in Waterloo Road and Greg Doland in Emmerdale as well as frequent guest appearances in The Glee Club, The Bill, Holby City, Doctors, Coronation Street and Heartbeat. He also appeared in Kay Mellor’s A Place of Safety which won a New York Critic’s Choice Award. Shaun’s stage career began as a founder member of Kenneth Branagh’s Renaissance Theatre Company in which he appeared as Don John in Much Ado About Nothing (directed by Judi Dench at the Phoenix Theatre), Fabian in Twelfth Night (directed by Kenneth Branagh at Riverside Studios) As You Like It (UK tour and Phoenix Theatre) and Hamlet (directed by Derek Jacobi). He also starred as Ray in the world premiere of A Going Concern (Hampstead Theatre) and as Macduff in Tom Morris’ production of Macbeth (BAC). Recent stage work includes playing MC in Terry Johnson’s revival of Oh! What a Lovely War (Theatre Royal Stratford East), Mr Boo in The Rise and Fall of Little Voice (Park Theatre), Geordie the Musical (Customs House) and Cinderella (Theatre Royal Windsor). Shaun is also a writer for stage, screen and radio whose work has been translated into six languages. Awards include a Sony Award, a Time Out Award, Five NSDF Awards and a Writer’s Guild Award.

Jack McBrayer (Ogie) was Emmy-nominated for his portrayal of Kenneth Parcell on the multi-award winning and critically acclaimed series 30 Rock for NBC. He is also known for his work on The Jack and Triumph Show for Universal/Adult Swim, Adult Swim’s first half hour comedy straight to series pickup, which Jack executive produced and starred opposite Robert Smigel. He can be seen in Cooties opposite Elijah Wood and Rainn Wilson for Lionsgate which premiered at Sundance. Jack also starred in Forgetting Sarah Marshall opposite Jason Segel, directed by Nicholas Stoller and produced by Judd Apatow for Universal. His other credits include Talladega Nights: The Ballad Of Ricky Bobby, directed and written by Adam McKay and produced by Judd Apatow for Columbia Pictures; The Campaign opposite Will Ferrell and Zach Galifianakis, directed by Jay Roach for Warner Bros; opposite Bill Hader in The To Do List for CBS Films; and They Came Together opposite Paul Rudd and directed by David Wain for Lionsgate.

Jack can also be seen appearing on ABC’s The Middle, Comedy Central’s Drunk History opposite Derek Waters and USA’s Playing House opposite Lennon Parham and Jessica St. Clair. He can be heard voicing the lead role of Fix-It Felix in Wreck-It Ralph, directed Rich Moore and produced by John Lasseter for Disney. His other animated film voice credits include Despicable Me for Universal, The Simpsons on Fox and Archer on FX.

Since finding international fame as a captivating singer on American Idol – Season 5, Katharine McPhee (Jenna) has become a successful recording artist, landing numerous songs and albums on Billboard’s pop, jazz, holiday and adult-contemporary charts in her native US. Her latest album of timeless American standards “I Fall In Love Too Easily” was released by BMG in 2017. As an acclaimed actress, she was the breakout star of the 2013 NBC-TV musical series Smash, Executive Produced by Steven Spielberg with music and lyrics by Marc Shaiman and Scott Wittman (Hairspray). She recently starred in the hit CBS dramatic series Scorpion.

Laura Baldwin (Dawn) trained at Bird College. Her recent stage work has included the roles of Janey in Eugenius!, Story Sandra in Big Fish and Sam in The Little Beasts (all at The Other Palace). Laura has also played Wendy in Peter Pan (The Gordon Craig Theatre), Teen Fiona/Red Riding Hood in Shrek (UK Tour), Veronica/Ensemble in Betty Blue Eyes (UK Tour) and Alice in Alice in Wonderland (The Lichfield Garrick).

David Hunter (Dr. Pomatter) trained at The Liverpool Institute of Performing Arts (LIPA). He is currently playing the lead role of Charlie Price in Kinky Boots (Adelphi Theatre) and previous West End credits include Once (Phoenix Theatre), One Man, Two Guvnors (Adelphi Theatre, National Theatre and UK Tour), Seussical (Arts Theatre) and The Who’s Tommy (Prince Edward Theatre). Other theatre credits include The Hired Man (Leicester Curve and Colchester Mercury), Pub (The Royal Exchange) Spinach (The Royal Exchange) and The Mayor Of Zalamea (Liverpool Everyman). In 2012 David reached the semi-finals of ITV’s Superstar, competing to play the role of ‘Jesus’ in Jesus Christ Superstar. Screen credits include the film Nativity 3 and he has recently filmed an episode of Holby City for BBC1. As the frontman of pop/rock band ‘Reemer’, David has recorded with the producers responsible for The Rolling Stones and The Who, before earning support slots for artists such as The Feeling, Scouting for Girls and finally McFly on their UK Arena Tour. In April 2018 David released his first Solo EP, Silver Linings, featuring five original songs.

Marisha Wallace (Becky) recently made her West End debut playing Effie White in Dreamgirls (Savoy Theatre) after playing the role at the Tony-winning regional theatre Dallas Theater Center. Since landing in London she has performed in numerous concerts at The Royal Albert Hall, the London Palladium, and she’s a part of Broadway and West End Divas. She recently performed the role of Celie in The Color Purple in Concert at Cadogan Hall and had two sold out nights at Zedel. Marisha’s Broadway credits include the original Broadway productions of Something Rotten and Disney’s Aladdin, and she also appeared in the first US national tour of The Book of Mormon. Other stage credits include Sistas!, Aladdin (Toronto), Oklahoma!, for which she won the Drammy for Best Actress, One Night With Janis Joplin, Rent and Hair. Screen credits include Aladdin (the forthcoming live action film), Disney’s Frozen Fever, The Tony Awards, Good Morning America, The View and Macy’s Thanksgiving Day Parade.

Waitress also recently announced the first of its “Cast Album Karaoke” nights in London, meaning that theatre lovers who have always dreamt of singing on the West End stage will soon be able to make their dream a reality. The first ever karaoke nights will be held post-show on Tuesday 19 February and Monday 18 March 2019. For the chance to sing one minute of any song from the show – live on stage and accompanied by the show’s musical director Katharine Woolley – interested audience members just need to sign up in the theatre before the performance.

Waitress opened on 24 April 2016 at Broadway’s Brooks Atkinson Theater. Based on the 2007 motion picture written by Adrienne Shelly, Waitress was the first Broadway musical in history to have four women in the four top creative team spots, featuring original music and lyrics by 6-time Grammy® nominee Sara Bareilles (“Love Song”, “Brave”), a book by acclaimed screenwriter Jessie Nelson ( I Am Sam ), direction by Tony Award winner Diane Paulus ( Pippin , Finding Neverland ) and choreography by Lorin Latarro. The production is currently touring the US and has also announced it will have its Australian premiere in 2020 at the Sydney Lyric Theatre. 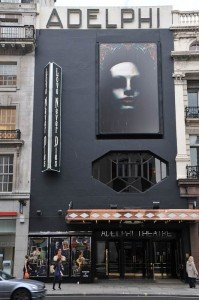 Adelphi Theatre London Brief History
The first building opened on 27th November 1806, in its early years, the theatre was primarily known for melodrama, titled Adelphi Screamers. Many of Charles Dickens stories were adapted for the stage and performed here. They included John Baldwin Buckstone’s The Christening. This was a comic burletta, which had its opening night on 13th October, 1834, founded on the The Bloomsbury Christening. This is considered to be the first Dickens adaption performed. Subsequent classics included popular ones such as; The Pickwick Papers, The Old Curiosity Shop and also Nicholas Nickleby.

With considerable improvements to the building needed, the theatre was demolished, and on Boxing Day on 26th December 1858 The New Adelphi was opened. The re-built theatre could seat 1,500 people, with standing room for an additional 500. The interior was lit by a Stroud’s Patent Sun Lamp, which contained a brilliant array of gas mantles passed through a chandelier of cut-glass. During the mid 1800s, John Lawrence Toole established and enhanced his reputation for comedies at the Adelphi.

Also in the mid-1800s, the Adelphi was host to a number of French operettas including La belle H’l’n. In 1867, the Adelphi was home to the first public performance of Arthur Sullivan’s opera, Cox and Box. William Terriss, an actor who performed regularly at the Adelphi was stabbed to death on 16th December, 1897 and is recorded on a plaque on the wall by the stage door. Richard Archer Prince, also known as William Archer Flint, a bit-part actor committed the murder of Terriss. It is said that Terriss’ ghost haunts the theatre. Terriss’ daughter Ellaline Terriss, a famous actress, and her husband, manager-actor Seymour Hicks managed the Adelphi for some years at the end of the 19th century.

The theatre re-opened as the Century Theatre on 11th September 1901 although the name reverted to the Adlephi in 1904. The new theatre was built by Frank Kirk to the design of Ernest Runtz. The dean of London musical theatre, George Edwardes, assumed control of the theatre in 1908. In the early 20th century, the Adelphi was home to a number of musical comedies. Today’s Adelphi opened on 3rd December, 1930 being re-designed by Ernest Schaufelberg in the Art Deco style. It was named the ‘Royal Adelphi Theatre’ and re-opened with the musical Ever Green, by Hart and Rogers. During 1940 the theatre’s name reverted to The Adelphi. The theatre continued to be home to comedy and musicals.

A proposed redevelopment of Covent Garden by the GLC (Greater London Council) in 1968 saw the theatre under threat, as well as the Vaudeville, Garrick, Lyceum and Duchess theatres. A campaign by Equity the Musicians’ Union and theatre owners under the auspices of the Save London Theatres Campaign led to the scheme being abandoned. During 1993, Sir Andrew Lloyd Webber’s Really Useful Group bought the theatre and completely refurbished it prior to the opening of his adaptation of Sunset Boulevard.

In November 1997, the Adelphi London West End became home to the musical Chicago which was the venue’s longest ever running production during its 8 1/2 year run, which also made it the longest running American musical in the history of West End theatre. In April 2006, Chicago transferred to the Cambridge Theatre on Earlham Street. Since then, the theatre has hosted Evita, Pet Sounds and also Joseph and The Amazing Technicolor Dreamcoat, with the lead part (Lee Mead) being cast by the BBC’s show Any Dream Will Do. The recent show was The Bodyguard.