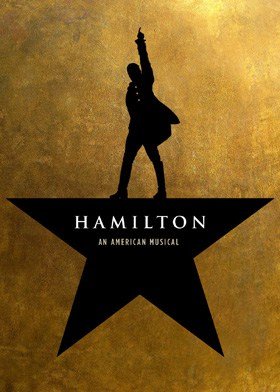 HAMILTON, the Broadway musical, which won 11 Tony Awards last night including best musical, will have its London premiere in October 2017. The critically acclaimed musical has broken box office records on Broadway and has become a cultural sensation. HAMILTON will reopen the Victoria Palace Theatre, which is currently undergoing an extensive multi-million pound refurbishment. From 12.00noon today, Monday 13 June you can register interest and sign up for priority booking at hamiltonthemusical.co.uk. Tickets will go on sale in November 2016.

“The support HAMILTON has received from our British fans has been incredible – I have been reminded of their love, which is just as our King George would want it to be! I’m thrilled the show will be shared with UK audiences starting in the fall of 2017 at the beautiful Victoria Palace Theatre,” said Lin-Manuel Miranda.

Jeffrey Seller said, “HAMILTON” is pure joy and I can’t wait to share it with London audiences. I’m delighted to be partnering again with Cameron, from whom I’ve been learning my entire career. And we couldn’t have a better home than the Victoria Palace Theatre, which will be a Palace, indeed, after its current renovation.”

Cameron Mackintosh said, “Just occasionally in life the stars align as they have now, and I have the perfect theatre available for one of the most brilliant, original and entertaining musicals I have ever seen. The moment I saw Lin Manuel’s remarkable HAMILTON I knew that this was a musical with a phenomenal story and score which will be performed somewhere in the world as long as people want to go to the theatre. To be working with my friend Jeffrey Seller again is an added bonus. My major redevelopment of the Victoria Palace will bring new life to a much loved building and I have no doubt HAMILTON will do the same for the musical theatre”.

HAMILTON, now on Broadway at the Richard Rodgers Theatre has book, music and lyrics by Lin-Manuel Miranda, is directed by Thomas Kail, with choreography by Andy Blankenbuehler and musical direction and orchestrations by Alex Lacamoire, and is based on Ron Chernow’s biography of Alexander Hamilton.

HAMILTON is the story of America’s Founding Father Alexander Hamilton, an immigrant from the West Indies who became George Washington’s right-hand man during the Revolutionary War and was the new nation’s first Treasury Secretary. HAMILTON’S score blends hip-hop, jazz, blues, rap, R&B and Broadway – the story of America then, as told by America now.

There has been a theatre on this site since 1832, well before the coming of the railways. When Victoria Street and Victoria Station were built, the Royal Standard Music Hall became, in 1886, “the most comfortable Hall of entertainment in London – no expense has been spared.”

The arrival of electricity and other theatrical technology in the early 1900s meant that significant changes were needed. London’s oldest licensed music-hall was demolished. In 1910 once more no expense was spared and Frank Matcham’s Victoria Palace cost the large sum of £12000 to construct.

The Victoria Palace Theatre retains much of its original character, in particular in the auditorium, front of house, and the dressing rooms which have been refurbished. The grey marble foyer with its gold mosaic and white Sicilian marble pillars is much the same as it was in 1911. Outside the facade, the canopy and cupola have been restored.

The auditorium holds 1550 seats and is air-conditioned. It features a magnificent sliding roof, a simple and still effective precursor of air-conditioning. Originally the Stalls, Dress Circle and Upper Circle each had their own entrance and their own box office selling pre-printed tickets from a paper plan.

The Victoria Palace moved into the new millennium with a significant building programme including enlarging the Foyer, WC facilities and increasing the dressing room space, whilst maintaining the character of an historic building.