Home » London Theatre News » SIX wows the critics and is the toast of New York! 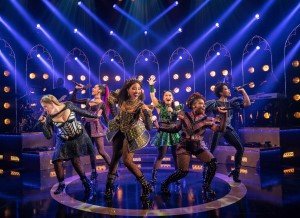 The Washington Post declared ‘SIX’ “the pulse-quickening pleasure trove that Broadway has been waiting for…an exhilarating jolt of musical-theater wit and joyful affirmation. At times, the vibe becomes so contagious that it may float you out of your very seat.”

Variety said: “Long Live These Broadway Queens! ‘SIX’ is as sharp and shiny as a sequined stiletto heel, and couldn’t have come at a better time.”

Time Out New York, also awarding a Critics Choice, said: “The queens sing their heads off and the audience loses its mind.”

While Entertainment Weekly proclaimed: “Broadway’s high-energy history remix reigns supreme replete with sparkly costumes, vocal runs that defy the laws of physics, and synchronized choreography tighter than a 16th-century corset. ‘SIX’ truly is the top ticket to celebrate the return of the live stage show. If you’re up for a euphoric celebration of the musical medium, Six is queen of the castle. Long may it reign.”

And Charles Isherwood for Broadway News added: “A wave of pure joy rippled across the theatre as soon as the first notes of the show were struck. It will, I confidently expect and indeed hope, be a long-running hit, playing to audiences on Broadway and elsewhere for longer than most of that wretched king’s marriages lasted.”

Thrilled producers Kenny Wax, Andy and Wendy Barnes and George Stiles, who only made it to the opening night by the skin of their teeth due to covid travel restrictions, said: “When our ‘Opening Night’ was cancelled just four hours before curtain up on March 12th 2020 we expected to be shut for 4-6 weeks. As the pandemic deepened, we feared we might never reopen. So to be standing at the back of the Brooks Atkinson theatre and seeing the spontaneous standing ovation 18 months after that shutdown, is humbling.

“For ‘‘SIX’ was the little show we discovered as a student production four years ago. What an incredible journey it’s been for the authors, the creatives and the four producers. We’ve had our ups and downs, with the cancelled reopening of a drive-in tour last August and our thwarted attempts to open at the Lyric in December. But ‘SIX’ is a plucky, resilient show and with its army of creatives, pro- duction staff, crew and of course the Queens, we have taken up residence at the Vaudeville in London, reopened the UK tour and now on the cusp of the grand prize – a New York opening – Broadway Baby!

“Judging by the reaction of audiences in both London, New York and our yet to reopen Australian production in Sydney, ‘SIX’ still speaks to the times, perhaps even more so after what’s happened in the world in the last two years? Certainly seeing a stage full of diverse, talented and empowered women reclaiming their stories and celebrating each other feels pretty electric right now. And we all feel extra lucky to be back on Broadway at this unique moment – the first new musical to have its press night, post-pandemic on the Great White Way.”

Co-author and co-director Lucy Moss, who becomes the youngest ever female director of a Broadway musical, said: “It feels so wonderful to be FINALLY opening on Broadway!!!! The last 18 months have obviously been heartbreaking, knowing our Queens, our band, and our amazing team could not do what they love. So it feels extra special to be opening tonight and we feel so unbelievably grateful they’re all back where they belong!!!”

The delayed opening night of ‘SIX’ was the first Broadway first night in 18 months and the stars, including ‘Hamilton’ creator Lin-Manuel Miranda, Kristin Chenoweth and ‘Tonight Show’ host Jimmy Fallon, were out in force on the purple carpet outside the Brooks Atkinson Theatre. All audience members had to be vaccinated and wear face masks at all times in the theatre.

After the show, celebrations moved to an after-party on Chelsea Piers, a vast warehouse-like space that opens out onto the Hudson River. All guests had to be vaccinated and have proof of a PCR test in the past 72 hours.

‘SIX’ has become a global phenomenon since its early days as a student production in a 100-seat room at Sweet Venue during the 2017 Edinburgh Fringe Festival.

The ‘SIX’ studio album has clocked up more than 25 million streams making it the second-highest streamed cast recording in the world, second only to the ‘Hamilton’ original cast recording.

The Walt Disney Company UK and Ireland has today announced the full cast for the UK and Ireland tour of the landmark musical THE LION KING, including … END_OF_DOCUMENT_TOKEN_TO_BE_REPLACED

A young Jewish physicist and an activist poet meet at a party and fall in love. As society splinters around them, the couple’s struggle to survive … END_OF_DOCUMENT_TOKEN_TO_BE_REPLACED