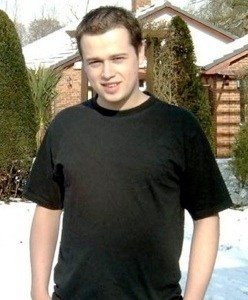 Chicago is the winner of the 1998 Olivier Award for Outstanding Musical and is the longest ever running Broadway musical in London’s West End. It is a fabulous musical and deserves to hold its place in the heart of the West End. This award winning production is filled with superb choreography written by Bob Fosse. The show is about murder, greed, corruption, exploitation, violence, adultery & treachery, so begins the musical.

Andrew Corcoran was born in July 1982 in South Manchester and attended a Catholic Boy’s Grammar School in Hale Barns, Cheshire.

With a father who was touring in musical theatre it was no surprise that Andrew showed an interest in music at an early age, and subsequently became an accomplished musician. At the age of five he taught himself by ear to play the Jesus Christ Superstar theme. His parents started him on weekly piano lessons in September 1987 and while still at primary school Andrew could play the entire score of Chess.

Moving on from school, Andrew went to the University of Huddersfield where he graduated in 2004 with a 1st class Bachelor of Arts (Hons) degree in Music with Theatre Studies and was also awarded the Crabtree Prize for All-Round Achievement.

Since leaving university, Andrew has worked in London’s West End and around the world as a keyboard player, rehearsal/audition pianist and musical director.

His impressive career to date includes working on the following shows;

I recently asked Andrew some questions about himself and his career.

Where did you go to school?
St. Ambrose, an all-boys Catholic grammar school in Hale Barns, Cheshire. Very much about religion and rugby, but there was a great music department hidden in there as well at the time!

What was the first musical instrument that you played and at what age?
My dad was touring in various musical theatre shows throughout my childhood. I was about 5 when I taught myself by ear how to play the Jesus Christ Superstar theme. My parents started me on weekly piano lessons in September 1987.

Did anyone in particular inspire you to play a musical instrument and work in theatre?
Well as you can see it’s pretty much all down to my dad’s line of work! I remember my school holidays were largely decreed by wherever he was working on tour at that time. I distinctly remember him in a summer season in Paignton on the Chess tour around 1993. I got to sit in with the orchestra, at the lighting desk, with the DSM, everywhere. That’s when I caught the theatre bug.

Did your parents and music teacher agree with your choice of instrument?
I was a quick learner on the piano because I loved making my way through my dad’s vocal scores. I could play the entirety of Chess while still at primary school (I remember the head teacher telling me off for bashing out “Endgame” too loudly on the piano in the school hall one morning). I almost gave up lessons when I hit adolescence but everyone convinced me to persist and my piano teacher dutifully endured me playing him various vocal scores for a few months before we could get back to focusing on technique.

Can you remember the first piece that you played in front of an audience and at what age?
There is home video footage of me playing the theme from Snowman. I think I’m about 6 or 7 years old. Note-perfect, too!

What was your first professional engagement?
I deputised on the UK tour of Scrooge while still at university and was lucky enough to be offered a keyboard chair on the tour of Joseph starting the week after I finished, in the summer of 2004. I’ve been busy ever since! I’ve now done over 1,500 professional performances on various musicals.

What is it like playing in such a high profile musical like Chicago?
First and foremost, getting to play a real piano on a show is such a rarity these days! It makes you work like a proper musician, whereas keyboards can easily be programmed to take shortcuts for you, or be badly programmed and require you to have expert computing skills. Also it’s fantastic experience to work on such a classic, well-worked and much-loved production. It requires you to hit the ground running and slot in with the high level of talented theatre-folk already working on the show.

Chicago has to be at the height of anyone’s career, but is there a play or musical that you would one day love to be a part of?
Well, working on a big professional production of Chess would bring my life full-circle, that’s for sure! One objective many people in this industry aspire to is to be part of the creative team for an original, hugely successful, new show that you will then always be associated with. That would be nice some day.

What does your role of Assistant Musical Director involve?
For me, it is to offer assistance and be there for the Musical Director you work with. A good relationship is essential on any long run of a show, and means you get treated with the respect you deserve. Never deem the AMD title to have a sort of automatic authority. The rest of the musicians don’t usually like that, and it can make your job harder on those few occasions you have to get up and conduct them! Every AMD job I do is a chance to watch and learn from each MD, adapting and improving my conducting or piano/conducting techniques. I never treat it as some sort of lower-middle management position.

Do you have anyone as a role model that you aspire to be like?
No-one in particular, no. My aspirations are based on qualities I like and dislike in various musicians and MDs I’ve worked with, as well as combating my own distinct failings!

Are there any long-term ambitions that you have either to do with theatre or not?
My “ambition” as I came to the end of my university life was to be able to live off the money I earned as a musician, which amazingly happened straight away, so I’ve set myself a pie-in-the-sky new ambition: to work on the music for big blockbuster movies, either as a session musician or on the creative side. Achievable, no?!

Are there any actors/actresses that you would like to work with?
There’s a lot of exciting onstage talent in theatre at present, I always get excited by the prospect of working with new and established principals. I loved it when David Bedella joined Chicago recently as Billy Flynn! There isn’t anybody in particular, though.

Which is your favourite part of London that you like going to?
The Theatre District is my playground! I guess the South Bank is always lovely to go to on a sunny day. I’m still relatively new to London, though, so every fortnight or so I go off and explore a new area of the capital. I love all the nooks and crannies around the City of London.

What is your favourite musical & film?
Rent had a bigger effect on me than I expected when I first saw it as a teenager. The recent DVD release of the Broadway stage version is one of the best show recordings I’ve ever seen! (That and the Broadway filming of Into the Woods, which is hilarious.) Singin’ in the Rain is a good example of a movie I didn’t expect to like, but richly deserves its labeling as a cinematic classic.

Thanks Andrew for giving up some of your valuable time!