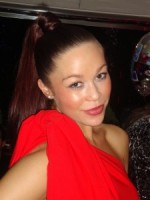 Amy was born on 29th December, 1986 in Sydney, New South Wales, Australia, she has two younger brothers. Amy mentions “we are all very close, I’m very lucky to have had such a supportive family throughout my life and career. One of my brothers is also an actor/musician, it must run in the family!  My other brother doesn’t like the limelight at all, which is probably a good thing as he balances us out.”

As with many young actresses it is often apparent from an early age that they are destined for the stage. This appears to be the case with Amy who says; Of course I was a ‘show-girl’! I loved being the centre of attention from a very young age, probably from about 2 years old! I loved music, and singing and dancing to it, but I didn’t start dance lessons until the age of 7, which for some, is quite old! I was always a bit of a “show-off” though, so as soon as I started, I fell in love with it and knew it was what I wanted to do forever!


I started acting at the age of 9 and then singing came after, at about 11 years old. The rest as they say is history. I did love Kylie Minogue as a child. ‘The Locomotion’ was my favourite song! I don’t think I was inspired at such a young age though, my Mum just knew I loved to perform for the family, so she thought the stage was the next step.

Amy started at the college at the age of 12 in Year 7 and continued through to the end of Year 10 and of her time at the college Amy says; “My school was in Sydney and I lived an hour and a half from there, so I got up at 5.30am every morning to get the train to school, and got home at 6:00pm every night. It was hard work at a young age but it never bothered me as I loved going to school, as nerdy as that sounds! I was lucky that I had quite a few friends to travel with. We all lived in the same area and got the train together to and from school every day.”

When Amy was 17 she attended the Brent Street Performing Arts Studio which offers a wide variety of performing arts for all ages and abilities. She did a full-time one year Performing Arts Course. She says “I received a Certificate 4 in Performing Arts at the end of it. It was a very intense year, from 8.30 – 4.30, 5 days a week. I loved every minute of it though.”

Amy’s first role when  leaving Brent Studios aged 18, was The Lion King, which she did for 18 months.

Amy has enjoyed several roles in her young acting career, including;

Before arriving in England during April 2008, Amy had previously watched some of her friends perform in the Australian production of Priscilla on a couple of occasions, and hearing that the show was opening in London, decided to audition for the role of Swing & Assistant Dance Captain in which she was successful. She then had to wait eight months to take up her role in Priscilla marking her West End debut in March 2009. Amy subsequently took over the role of Diva and Assistant Dance Captain.

Amy says “it’s been great to move over here and still do something Australian. I have to say all the other guys are great at doing the Aussie accent.”

The Dance Captain and Assistant Dance Captain’s job is to keep the show in good shape, and they do this by watching the show and taking notes which they pass on to the cast. They have to know all of the choreography to make sure the performers aren’t changing it because they have to stay true to the show.

In the early stages of this role Amy wrote in the Priscilla Blog; “I was a bit nervous at first, because you are one of the cast, but also there is a pupil teacher element of having to tell people that they are sometimes doing things wrong. However this is one of the most supportive casts that I have ever worked in and they understand our roles, what we have to do and they really respect that. It’s also hard for me in that at 22 I am the youngest in the cast.”

During her time on Priscilla, Amy has loved playing all of the female roles in the show, particularly because the characters are all so different. Amy says of Priscilla; “It is such a feel-good show. You have to leave feeling amazing. You fall in love with the characters in what is a touching and moving story. I don’t know why anyone wouldn’t love it.”

Since arriving in England Amy has lived in London and she says; “I love London. There is no place like home and Australia will always be my first love, but London is amazing. I love the atmosphere and the nightlife and there’s also a ‘million’ shows on in the West End, where there are only a few in Australia. I’m very lucky to have such a supportive partner, who is also in the industry. It’s great to have someone who understands your life, as he lives the same lifestyle. It’s nice to be able to watch each other on stage and cheer each other on.”

Amy’s final performance on Priscilla was on Saturday 2nd April, 2011. She has decided to take some time out before heading off to Hollywood where she is hopefully going to realize her dream of working in films. She says; “My dream is to make movies. I want to work with inspiring directors, and great actors, so Hollywood’s the next stop.”

I asked Amy some questions about herself and her life.

Do you have anyone as a role model that you aspire to be like?
“I admire anyone who has lasted in this industry, as it’s a very tough one to crack. I’ve always loved Britney Spears as a performer. I think Kylie Minogue is a good role model, she’s always changing and growing as an artist and as a fellow Aussie, I think she’s great!”

If you won a million pounds what would you spend the money on?
“Oh wow, that’s a lot of money! I’d buy a house and look after my family..after going on a huge shopping spree of course! (Ha ha)”

Do you have any favourite sayings?
“I like to go by the saying “Live every day like it’s your last”… it’s more of a motto, but I think it’s a good one.”

Which is your favourite part of London that you like going to?
“I used to live in Covent Garden and I love it there, I really feel like it’s the heart of the city.”

Have you passed your driving test?
“I did have my Learners Licence in Australia, but I was working and travelling so much that I wasn’t in the one city long enough, and it expired. I guess I should get onto getting a new one!”

Do you have a favourite colour in your wardrobe?
“My favourite colour is pink, but I don’t wear that colour anymore. It’s cute when you’re young, not so much as you get older! I have a lot of colours in my wardrobe, but I love black, white and denim.”

You recently visited Edinburgh, what did you think of the city?
“I absolutely LOVED Edinburgh!!! It’s such a beautiful city, I had the best time there! I love the culture and history. It’s my new favourite place”.


What would be your favourite meal if taken out to dinner?
“I absolutely love Thai food. My favourite restaurant is Busaba Eathai in London, the food there is delicious!”

What is your favourite musical?
“That’s a hard one! Obviously I think Priscilla and The Lion King are amazing shows, and I also love Wicked and Legally Blonde! I’ve seen them a lot of times, but I keep going back for more!”

Do you think that you will go back to Australia at some point to be on the stage there?
“I’m enjoying exploring other parts of the world at the moment, but never say never!”

Apart from England and Australia, which other countries have you enjoyed going to?
“I love so many places! I love South Africa, America, France, Spain & Greece..there’s still a lot of countries I want to visit!”

England vs Australia at anything. Who do you support?
“Australia!!! I wouldn’t be a true blue Aussie if I didn’t!

Clearly, Amy Edwards is a very talented young actress who has a very successful career ahead of her and I wish her the very best in the film industry. Hopefully we will see her back on the London stage at some point in the future.

This show, Willy Hudson began by saying, is about himself. It is written by himself, is directed by … END_OF_DOCUMENT_TOKEN_TO_BE_REPLACED