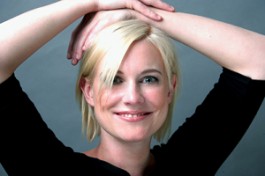 Isn’t it funny how your body goes into ‘shut down’ after you’ve been busy for a prolonged period?  Having just finished a hugely successful run of ‘Decline & Fall’, it feels a bit like I’ve done just that – my body has ‘Declined and Fallen’!  But, post show ‘flu’ aside, it has been a truly remarkable 3 months.

Little did I know, when I auditioned for the role of the deliciously deadly ‘Mrs.Beste Chetwynde’, in the first ever stage adaptation of Evelyn Waugh’s ‘Decline & Fall’, I would be a) working with a Time Lord (Sylvester McCoy, the Seventh Doctor himself played the eponymous ‘Captain Grimes’) or b) the show would be such a sell-out success that the run would be extended!  It really was a truly amazing feeling to be in a fringe play that sold out practically every night.

But then we did have a superb adaptation penned by the ‘amazing’ Henry Filloux Bennett of Les Nes Productions at ‘The Old Red Lion’, a fantastic director in Tom King and a truly lovely and very talented cast, Michael Lindell, Emily Murphy, Morgan Thomas, Sylvester McCoy, Jonathan Hansler, Owen Roberts and ‘lil ‘ol me!

It’s nice to use the time, amid my snuffles, to reflect on what a great few months it has been and indeed what a great year 2010 was.  I was lucky enough to tour with ‘The 39 Steps’ last year and also did a brief couple of weeks on the West End show. Literally a week later I was cast in ‘Decline & Fall’ and now here I am, about to shoot a pilot for a comedy sketch show.

There seems to be a thread running through all this – ‘The 39 Steps’ was a period comedy set in the 30’s, ‘Decline & Fall’ cast me as a 1920’s comedic femme fatale and I’m set to play a comedic 1940’s film noir type (American this time) in my first telly job.  Can we stretch my casting to include the 50’s or the turn of the century do we think?!  What a lovely but funny little niche to find yourself in!

Any way, must dash, this is my first foray into the world of ‘blogging’ and  I have also embraced the world of ‘tweeting’ for the first time (http://twitter.com/LaDownie) and attempt – god I sound like I’m some kind of technological dinosaur!  I must go because I’m being summoned by various different social networks – they didn’t have this problem in the 1920’s…