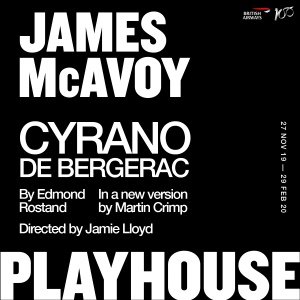 Fierce with a pen and notorious in combat, Cyrano almost has it all - if only he could win the heart of his true love. There’s just one big problem: he has a nose as huge as his heart. Will a society engulfed by narcissism get the better of De Bergerac - or can his mastery of language set Roxane’s world alight?

James McAvoy returns to the West End in an inventive new adaptation of Edmond Rostand’s masterwork by Martin Crimp, with direction by Jamie Lloyd.

Fresh from their triumphant Broadway transfer of Betrayal, The Jamie Lloyd Company’s latest production blazes into the Playhouse Theatre with linguistic ingenuity to celebrate Cyrano’s powerful and resonant resistance against overwhelming odds.

The Royal Avenue Theatre had its first production on the 11th March 1882 with a revival of Offenbach’s Madame Favart. The prefix “Royal” was very soon dropped from the theatre’s name. Comic operas, burlesques and similar shows remained the main source of entertainment for several years. For much of this time, Arthur Roberts, a very popular star of music halls led the company at the Avenue Theatre.

In the early 1890s the emphasis of productions changed to drama and in 1894 Miss Horniman, the tea heiress, later a pioneer of the repertory movement, anonymously sponsored actress Florence Farr in a season of plays. Unfortunately, the first production wasn’t successful, however Miss Farr persuaded her friend, George Bernard Shaw, to complete his play, Arms and the Man, as a quick replacement which resulted in his first West End production.

It was enough to convince him to drop his music critique in favour of play writing. The theatre re-opened as The Playhouse Theatre on 28th January 1907 with a one-act play called The Drums of Oudh together with a play called Toddles, by Tristan Bernard and Andre Godferneaux.  Since that time the Playhouse has hosted the likes of W S Gilbert, legendary actress-manager Gladys Cooper, the BBC, The Almeida Theatre Company, The Peter Hall Company, and Janet McTeer. In January 2003, Maidstone Productions took over the ownership of the Theatre.

Maidstone Productions, owned by London and Broadway producers Ted and Norman Tulchin, has been behind a number of hit productions on both sides of the Atlantic. In March 2003, the Ambassador Theatre Group took over the ownership of the Playhouse Theatre.

It is hardly the salient point in a musical where Russian Jews are singing their stories in English in the first place, but I do wish this cast of Fiddler on the Roof had followed Andy Nyman’s Tevye in being consistent in using one accent for their character throughout the evening. I hasten to add […]

The Book of Exodus says that after crossing the Red Sea, Moses led the Hebrews into the Sinai, where they spent 40 years wandering in the wilderness. Fortunately for the inhabitants of a small Russian village at the turn of the last century, all they had to do was move across the river as they […]

Direct from its sold-out run at the Menier Chocolate Factory, Tony and Olivier Award-winning director Trevor Nunn’s ‘exuberant revival’ (Daily Telegraph) of the classic Broadway musical Fiddler on the Roof transfers to the West End for a strictly limited run. The Playhouse Theatre will be specially transformed into an immersive space for this ‘shiveringly intimate […]