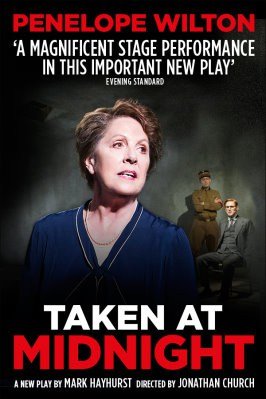 What do you get when you cross a compelling true-life story, with superb writing and a truly amazing performance from one of the UK’s foremost female actresses? You get Taken at Midnight currently running at the Theatre Royal Haymarket.

Hans Litten (Martin Hutson) is a lawyer, and one with a bit of notoriety to his name as during the years 1929-1932 he represented opponents of the Nazi party, their heavy-handed ways of garnering support for their beliefs and their brutish methods of dealing with those that didn’t agree with them. He added to his notoriety on May 8th 1931 by forcing to the witness box the leader of the Nazis, Adolph Hitler, and in a marvellous piece of cross-examination, exposed him as the leader of a bunch of thugs, rather than the conventional German middle-class politician he wanted the world to believe he was.

Unfortunately for Hans and the rest of the world, Hitler managed to make himself electable and the Nazis came to power and started to extract their revenge on their enemies. Hans Litten was arrested at Midnight on the 28th February 1933 – sorry, not arrested but taken into “Protective Custody” and this is when our story starts. Hans has a very tight bond with his mother Irmgard (Penelope Wilton) who instinctively knows something even though she is not with him when he is taken. Once she finds out he has been taken to Sonnenburg Concentration Camp – through a piece in a local paper – she moves into action, making herself just unbearable enough that the Nazis tolerate her but not so bad that they lose patience and deal with her. Her main contact for news about her son is a Berlin Gestapo Officer, Dr Conrad (John Light). A cultured, intelligent man, who likes his tea and seems to genuinely have some form of affection and even admiration for Irmgard as he gets to deal with this proud, obstinate, obsessed woman and her dedication to her son.

Hans himself is having a very hard time of things sharing a cell with a Communist, Carl von Ossietzky (Mike Grady) and an anarchist, Erich Mühsam (Pip Donaghy) these three seem to bear the brunt of the SA’s brutality. Even so, the three of them have some very good natured and amazingly amusing discussions of the current regime and the people imprisoning them. No matter how desperate things get, and they keep getting worse as Hans is transferred from camp to camp until finally ending up in the Jewish section of Dachau, Irmgard refuses to give up.

Working with, and sometimes against, Hans’ father, Fritz Litten (Allan Corduner) she enlists the help of English diplomat, Lord Clifford Allen (David Yelland) to speak to Hitler directly. This provides an interesting insight into the political thinking of the day when appeasement was all the rage and the UK, along with the other great powers, thought that Germany was just going through a bit of an upheaval and that Mr Hitler bloke would soon settle things down. Even when confronted with eye-witness accounts of what was going on in the concentration camps, there was a distinct lack of willingness to get involved. The determination of Irmgard is steadfast, never giving up and holding to a hope that justice will prevail, she fights all the way until Nazis finally take the ultimate revenge on Hans and she knows there is no longer a fight to be had.

From the moment we entered the theatre, when my companion observed with a sense of foreboding the stark set, I had a feeling we were in for something special with this show. The story itself is so compelling; a Jewish lawyer humiliates Hitler, who waits to get his revenge, mixed with a mother that just won’t give up turned into an amazing play by writer Mark Hayhurst and Director Jonathan Church. The script was amazing and superbly delivered by the entire cast. I loved the exchanges between Irmgard and Dr Conrad, two people who in other circumstances would probably have been great friends. Martin Hutson’s Hans was amazing, moving skilfully from being a fairly relaxed urbanite as he was taken into protective custody to ending as the physically wrecked individual that refused to give in to the beatings and torture and who never forgot his own humanity in Dachau. He and indeed the entire cast could have been so downbeat in their portrayal of the horrendous things happening to them but there was a surprisingly large amount of humour in the script which was never forced but helped to keep the atmosphere from getting too heavy. Near the end, was a truly wonderful re-enactment of the original courtroom cross-examination, where Hans took on Hitler and started the process that would inevitably lead to his death and for that instant, it was possible to see why he was considered such a great lawyer and why Hitler and the SA hated him so vehemently.

But it was the performance of Penelope Wilton as Irmgard that really dominated this wonderful show. Often alone on the stage and talking directly to the audience, Penelope gave a breathtakingly amazing performance of a dignified, strong-willed woman who was never going to give in to doubt or abandon her son to his fate. I have no idea whether she has children in real life but, on that stage, she was a mother on a mission to save her son and nothing was going to stand in her way.

Taken at Midnight is unfortunately on a limited run, and my recommendation is get booking now so that you too can experience this masterpiece of theatre before it moves on.

TAKEN AT MIDNIGHT
Penelope Wilton originates the role of Irmgard, the mother of celebrated lawyer Hans Litten who puts Hitler on the witness stand in 1930s Germany with devastating consequences.

The unquestionable love of a mother for her son is at the heart of this compelling new play. Fearless and indomitable she confronts his captors at enormous personal risk to fight for his release against the seemingly impossible might of the Nazi regime.

Taken at Midnight is the first new play to open in the West End in 2015 and runs for only 8 weeks. Don’t miss this rare opportunity to see one of the UK’s most acclaimed stage actresses in a fascinating and important new play.

This riveting drama explores one woman’s struggle, her son’s resistance and the heroic battle of the weak against the powerful, truth against lies and mothers against murderers.

Titus Andronicus is not usually a comedy, it is usually a bloody, villainous and vengeful tale, but tonight it is a comedy and a rather amusing one at … END_OF_DOCUMENT_TOKEN_TO_BE_REPLACED

This show is not without clichés - there are three of note in this production. Firstly, the French horn of the show’s title is personified, speaking … END_OF_DOCUMENT_TOKEN_TO_BE_REPLACED

There’s very little in the way of set in this show: aside from chairs, a few crash barriers and at one point, a red carpet, the actors’ movements … END_OF_DOCUMENT_TOKEN_TO_BE_REPLACED

South African born, but raised on the Isle of Man, Pierre Novellie is a true raconteur rather than just another 'stand-up' comedian. He says about his … END_OF_DOCUMENT_TOKEN_TO_BE_REPLACED

This show, Willy Hudson began by saying, is about himself. It is written by himself, is directed by himself and executive produced by himself. Almost … END_OF_DOCUMENT_TOKEN_TO_BE_REPLACED