Home » Reviews » A Be Bop a Lula! party at the Ambassadors Theatre London 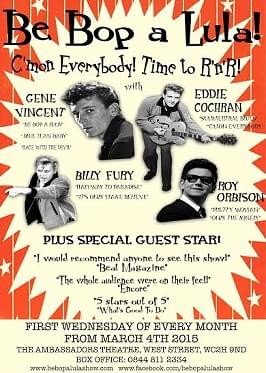 I personally prefer shows that pay homage to stars rather than the Jukebox Musicals. You know what you get rather than some thin storyline weaved with famous songs. And Be Bop a Lula! proved it once again for me. The audience wasn’t your typical West End Audience, A gentleman next to me, told me it was his first time in years he was back in London and his first West End Theatre. “I Like It” he said approvingly. The Ambassadors Theatre is small but perfect for a show or tribute concert like this. One of the first things I noticed is most of the audience members knew each other which already gave it a very pleasant atmosphere. This, of course, is a touring show but it will have its monthly home at the Ambassadors Theatre every first Wednesday of every month.

The show gets introduced by Spencer Evoy giving us a preaching lecture starting with the words “ In the beginning, there was a basic rhythm, the bang of a rock upon rock” before the safety curtain gets raised and showing us the The Wild Caps, The Show Band, existing out of some of the best musicians I have seen in a while and The Reverend DJ Spencer, with his energy and wobbly legs, shows he is one of them throughout the show grabbing his saxophone where it’s needed.

During the night we, the audience, were spectators of a live WKNB Radio broadcasting live from the Ambassadors Theatre, London. It’s an imaginary concert which is loosely based on the 1960 UK tour starring Gene Vincent and Eddie Cochran which ended in losing the life of Eddie Cochran and the career of Gene Vincent due to a fatal car accident.

First up was Britain’s answer to Elvis Presley, Billy Fury, played by Gavin Stanley. Followed by Roy Orbison played by Lars Young, Then Gavin Stanley returned as Eddie Cochran, followed by Lars Young’s Gene Vincent. In between the acts, The Wild Caps gave us wonderful renditions of songs like the Night Train, Tequila to name just a few. Act One got the radio show ended with a surprise guest star, A brilliant Peter Gill as Jerry Lee Lewis.
Act Two gave as pretty much of the same, starting with a news report of the deaths of the stars Buddy Holly, Richie Valens and The Big Bopper Gene Vincent and Eddie Cochran gave a beautiful version of Three Stars.

With two actors performing four singers, Gene Vincent and Eddie Cochran are the main stars of the evening. But Gavin Stanley and Lars Young move between their characters with ease, showing their characters and faults, as did Peter Gill. Their impressions are spot on as they bring you back in time with hits like A Thousand Stars, C’mon Everybody, Crying, Great Balls Of Fire, Pretty Woman, Wondrous Place, Three Steps To Heaven and of course Be Bop a Lula. And these are only a handful of songs for a show that is just over 2 hours long. The energy and fun that occurs on that stage by each musician made sure that everyone single person of the audience forgot the outside world, with people dancing in the aisle and here and there a standing ovation from an approving fan and approving nods all around, The Producer Lord Tim of Accelerator Entertainments should call himself Lord Time of Accelerator Entertainment. Forget the big shows, go back to the 1960s and treat yourself to a party at the Ambassadors Theatre instead.

Four giants of the Rock ‘n’ Roll world come together for the first time in BE BOP A LULA! A brand-new show which will take your breath away from the first chord to the explosive finale!

Eddie Cochran and Gene Vincent first came to the UK in the legendary 1960 tour. Eddie tragically never made it back home after dying in a car crash over here but his musical genius paved the way for future artists such as The Beatles. Forever young, Eddie became a huge cult figure for Teds and Rockers alike.

Gene Vincent was an instant Rock’n’Roll rebel who fans simply loved. Sculpted in the UK by legendary producer Jack Good his black leather almost Shakespearean moody image almost scared fans into submission. One of the coolest ever rockers, Gene’s songs will rock you out of your seat.

Billy Fury was also on that fateful tour and he became great friends with Cochran. Billy is known as Britain’s true rocker having written his own first album ‘The Sound Of Fury’. For an artist to write his own songs was almost unheard of back in the 1950’s and this album, produced by the legendary Jack Good is now a classic. Some of it is performed in Be Bop A Lula along with Billy’s huge hits.

Roy Orbison needs no introduction. With songs such as ‘In Dreams’, ‘Crying’, ‘Mean Woman Blues’ and ‘ Only The Lonely’ he is a big addition to the already amazing line up.

Backed by some of the UK’s finest musicians, Gavin Stanley and Lars Young recreate these legends with passion and a very real ‘feel’ of the artists and their music.

Both artists have had extensive experience performing in London’s West End and Broadway. Don’t miss this chance to see them.