Home » London Theatre News » A Joy for the audience, not for the Characters 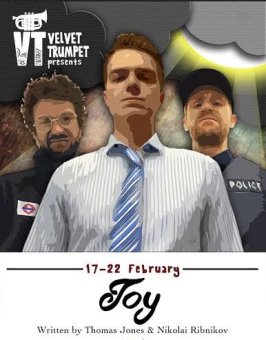 Fringe theatre plays mainly suffer from funding, but with a bit of imagination and the free technology we have in the warmth of what we call home, one would expect a bit of decent advertising. Yet somehow, Fringe theatre doesn’t seem to be too bothered with modest publicity. As does this play “Joy”. Written by Thomas Jones and Nikolai Ribnikov. The poster does not appeal to me at all, nor does the trailer at The Etcetera Theatre, a small theatre above a pub in Camden. I was once again reminded… Don’t judge a book, by its cover.

The Concept of “Joy” is not new, but then what is? Having three monologues about the questioning and looking for Joy or Happiness, a title which I presume they didn’t use due to not having people confusing their play with the same subject film called Happiness by Tod Solondz. I won’t give too much away about the stories so as not to spoil your enjoyment, because what the stories are, is that they are original.

Although three totally different stories and performances, as one story and performance left us, the other flowed in, like a master DJ mixing their songs. The entire evening felt like a perfect musical chord. Unlike New York Stories, this was London Stories. So why we got welcomed by a jazz score is not very clear. My guess is, that thanks to Oscar Nominees Whiplash and Birdman, two films that rely on a jazz soundtracks, jazz, like beards, have become trendy again. It did not work for me.

With a kitchen table, filled with bread, jam, marmalade, a famous chocolate spread, butter… and a toaster, Jon Cottrell dims the sound noise of the audience, by walking towards the kitchen table with shoes in hand, shirt on shoulder. He dresses himself further, taking his time. Jazz music and Auditorium lights dim. “Hello” he says and off we are in a very funny journey through one man’s suffering of a 7 year marriage break-up, a no option living with his brother who he doesn’t talk to brotherly about and his trying to “get over it”, by dating a woman called Tessa. We get to physical meet Tessa in the form of a lady picked out of the audience. Living in a society where heckling is a people’s favourite and the fact that she didn’t even flinch when asked to make or prepare toast for the character Michael, makes me wonder if she wasn’t planted. Planted or not, it was a funny and original attribute to an already well written monologue. Using toast, toaster and other kitchen appliances as a metaphor for the search of love and joy is clever and original.

Table and toast gone, in comes Thomas Jones carrying a flip chart. Lights in the auditorium stay on, we immediately establish that he is a police officer and we are children at a primary school. PC Bennett, from the” Metropolitan Police Marine Policing Unit”. Again the audience get hauled in and we are being educated how dangerous the Thames can be. It follows the previous monologue with its humour and wit. With the Line “Love your dads, whatever you do. Lesson One” You realise, he has a big chip on his shoulder. As the monologue continues, the humour gets a dark turn and twist. The lighting changes and becomes more focused on our Police officer. Roger becomes less macho and more real. I found this monologue a bit too long. The monologue is so well executed that the ending feels a bit like it’s questioning the intelligence of its audience by explaining why PC Roger Bennett is there educating children and their teachers. The final sentences are beautiful and touching though “I’m just glad my father can’t see me now…”

Out goes the flip chart and in comes Simon Grujich, who I am still not sure if he is the same actor that features in the program. With a chair and a megaphone he sits himself down to the tune of The Doors, This is the End. Tube driver Phil, takes us through the darkness of the tunnels of the Bakerloo Line. Convincing us, and himself, that he is happy. The last monologue of the evening carries the dark humour from the previous second part. With every station announcement his frustration and disappointment of his entire being and that of others become stronger and clearer. He even failed his suicide attempt. And as we arrive at the terminated destination Elephant & Castle he has lost it, speaking through his megaphone right into the audience. The laughs are here, but the laughter changes over the course of the evening. The long pauses in all three are to be cherished, but not as much as do in the last monologue.

All three actors gave strong and believable performances. It would be interesting to see, like they used to do and what Danny Boyle did with the two main actors in Frankenstein at the National, if they would change monologues. The simple lighting and sound effects, created by Samuel Gregory, was used to the full effect as were the limited props. Timely and aptly staged by Nikolai Ribnikov, this play is solid enough to have it performed in a bigger venue. Catch it until the 22nd of February at The Etcetera Theatre in Camden, London and hopefully many other places soon.

Starring: Jon Cottrell, Thomas Jones and Simon Grujich.
Velvet Trumpet are a South London-based theatre company with a passion for intimate new comedies which delve into the humour and pathos of unexplored occupations and unexamined lives.

When Michael’s marriage fails and he is forced to move in with his brother, it’s fair to say that life has taken a turn for the worse. All seems lost until he meets the love of his life over a slice of toast at a party. Could this be the start of something special?

Thames cop Roger has come to a local primary school to tell the kids all about his work solving crime on the river. But it’s not his usual beat and he’s not happy about it. Can this fish out of water successfully educate his audience without resentment getting in the way?

Lonely tube driver Phil ferries thousands of passengers up and down the Bakerloo line every day. The same line, the same stops, the same announcements. But who’s actually listening?

The answer to all these questions is of course ’no’ (except the third one which is technically ‘no one’). But you get the picture. The picture’s bleak.

Think back. Has anyone ever said to you that looks don’t matter, its personality that counts’ Anyone that answered ‘No’ to that skip to the next … END_OF_DOCUMENT_TOKEN_TO_BE_REPLACED

A Streetcar Named Desire might just happen to be on the minds of regular theatregoers in London at the time of writing, on account of the Almeida … END_OF_DOCUMENT_TOKEN_TO_BE_REPLACED

Titus Andronicus is not usually a comedy, it is usually a bloody, villainous and vengeful tale, but tonight it is a comedy and a rather amusing one at … END_OF_DOCUMENT_TOKEN_TO_BE_REPLACED

This show is not without clichés - there are three of note in this production. Firstly, the French horn of the show’s title is personified, speaking … END_OF_DOCUMENT_TOKEN_TO_BE_REPLACED