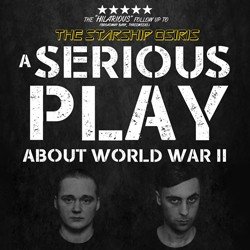 When you have won every comedy award possible, what else is a production company to do? Well, in the case of Willis & Vere who did so well last year at the Vault Festival with their show The Starship Osiris, the next challenge was to move from comedy to drama. So this year, they have brought their new show A Serious Play About World War II to the Vault and I was lucky enough to get to see it.

This is no ordinary production. It begins with Ian Fleming (no relation I think) playing some mournful music on a violin. The music sounds like it is Jewish in origin and the reason for that becomes clear when George Vere and Adam Willis come on to the stage to talk about this project. George and Adam have carried out a lot of research before writing their show which tells the story of holocaust survivor Hirshel Günzberg. A Jewish boy was taken to Auschwitz when he was just 8-years-old. Obviously, George and Adam aren’t making a documentary so put their own, rather interesting spin on Hirshel’s story and the events he went through.

At this point, I have to stop any description of the performance because, like so many wonderful plays of this ilk, it is something that has to be experienced. Plus, to be perfectly honest, I’m not entirely sure that you would believe me if I went into detail of the story. Suffice to say, over the course of roughly sixty minutes, George, Adam and to an extent, Ian – along with Natalie Hughes, Ian Macnaughton, Sebastian Calver and Martin Cooper-Langham – deliver an amazing show full of twists and surprises that will amaze and befuddle you. Just remember the rules, laughing prohibited or as they say in German, lachen ist verboten and in Yiddish, lafing iz proukhibatad.

So, once again, the extremely fertile, and very possibly slightly deranged, minds of George and Adam, have worked overtime to take a subject, play with it and then produce sixty minutes of sheer, unadulterated joy for someone to sit and watch as an audience member. The pace is very fast and it is surprising how much is slotted into the performance. It must be physically exhausting for the actors just keeping up with things. George and Adam direct the show so there is no let-up for them as writers and stars. In fact, the only person who has a pretty quiet time of things is Mr Fleming who seems to serenely be able to let everything pass him by. Maybe it’s the violin playing that keeps him level-headed but, most of the time, Ian is the epitome of Rudyard Kipling’s epic poem “If”. George and Adam are both extremely good actors who bounce off each other, both physically and verbally really well. They also manage, despite all the distractions around them, to keep in character. They always say the best way to play comedy is to play it completely straight and both George and Adam are masters at that.

Ultimately, A Serious Play About World War II probably shouldn’t work but, despite its rather ambiguous title and initial subject matter, the show completely does. As I had seen them before, I asked my companion on the evening what she thought. To summarise her answer, she loved the show and loved Gorge, Adam and – to a lesser extent – Ian. And when all is said and done, I can’t argue with her and I really can’t wait to see where the guys minds drift to, for Vault 2019.

After the success of their five-star, award-winning farce The Starship Osiris, Willis & Vere have surprised critics by turning their back on comedy to adapt the memoirs of a Holocaust survivor.

The production has been written and directed by George Vere and Adam Willis (The Starship Osiris, Comedians After Hours Live).