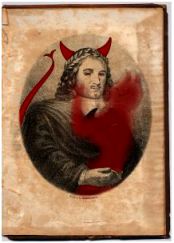 A Trick To Catch The Old One is a tale of villainy and vice, of deception and betrayal, of cupidity and lust. It is also a lengthy tale with enough sub-plots, disguises and twists to make your head spin. Thankfully director Jenny Eastop has been ruthless with both the text and the protagonists; wielding her red pen like a knife she has sliced and chopped until the story is clear enough to suit modern brains and short enough to suit modern bottoms. A wise move as the Rose Playhouse, although atmospheric and evocative, is logistically restrictive and slightly chilly. The production team and the cast make extremely creative use of the unusual space, however, and the result is an absorbing and entertaining performance.

The pared-down play centres on a charming ne’er-do-well, Theodorus Witgood, and his efforts to obtain money from his wealthy uncle by pretending that he is engaged to a rich widow. The widow herself, actually a courtesan, enters into the scheme with gusto and soon they manage to embroil a motley selection of people in their machinations, including sinister moneylenders and the uncle’s sworn rival, who determines to thwart his old enemy by securing the widow for himself.

Author Thomas Middleton has a keen but tolerant eye for human frailty and transgression. While sin is neither concealed nor excused, neither is it condemned. This play is certainly no stern lesson in morality, and none of the miscreants comes to a particularly sticky end. Women are treated by men as commodities, certainly, but since the one female character in this particular adaptation is intelligent, strong, and thoroughly enjoying the whole charade in which she is an active participant, it is difficult to say who exactly is being exploited.  Middleton has a love of the ridiculous and a nice line in smutty innuendo, which the cast gleefully emphasises with expressive gestures and thrusting hips.

Eastop has chosen to excuse the obsession with money by setting the story during the late 1940s when rationing was fierce, money scarce, and black market dealings commonplace. It seems a needless conceit, as Middleton’s theme and characters are timeless; the play would have been just as believable in modern dress, especially in these straitened times, with the corrupt moneylenders as city bankers. However her choice of period gave them a chance to slink furtively around the stage in flasher macs and fedoras, which was entertaining.

The sets and props are simple but very effective, with seamless changes carried out by the cast themselves – in character. Comic signs and placards are used to indicate a change of location and sounds are used to great effect, making the most of the superb acoustics of The Rose. Even when the action left the stage and recommenced at the back of the theatre, across the water, not a word was lost.

The cast is excellent; everyone clearly understands and enjoys the language and they all keep the rambunctious comedy just short of pantomime. Robbie Capaldi, as the ubiquitous Host, and Alana Ross as money-lender both have beautifully expressive faces and a gift for comedy. Cameron Robertson is super as Witgood’s wide-boy uncle, and Stephen Good, the aged “adversary”, is a wonderful hybrid of Bruce Forsyth and Steptoe.

I am still not entirely clear in my mind who the ‘Old One’ is. One of the rich, elderly gentlemen perhaps? Or maybe Old Nick himself really does watch over the wily protagonists and their double dealings. If so, I hope that he enjoyed this production as much as I did.

Offie nominated Mercurius presents A rollicking City Comedy, A Trick to Catch the Old One by Thomas Middleton and directed by Jenny Eastop.

When young Witgood’s greedy uncle tricks him out of his inheritance he determines to get his own back by passing off his courtesan as a wealthy widow.  But news of this wealthy widow’s arrival sends everyone scrambling to grab the willing courtesan and Witgood’s plot threatens to spin out of control.

The descriptions of what happens in this show are so vivid that paradoxically they leave nothing to the imagination – and, at least at the performance … END_OF_DOCUMENT_TOKEN_TO_BE_REPLACED

As theatre productions go this is a memorable, magical experience filled with heart and love and so many tiny thoughtful details, that I’m not sure a … END_OF_DOCUMENT_TOKEN_TO_BE_REPLACED

There are no props at all in Dog, and yet despite a dog, Roy, being very much a key character, the staging and dialogue are more effective than they … END_OF_DOCUMENT_TOKEN_TO_BE_REPLACED

Be astonishing. That’s Derek Jarman’s exhortation to the world at large and - at the end of the show - to this particular audience. And in this … END_OF_DOCUMENT_TOKEN_TO_BE_REPLACED