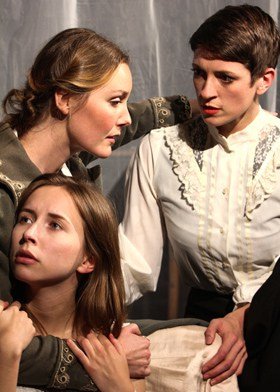 Eighteen months ago, I had the pleasure of going to review two one-act plays at the Illuminate Festival. These plays were ‘Reunion’ and ‘Echoes’, both by playwright Neil Simon, whose writing I described as ‘darkly comic and simply brilliant’ at the time. The plays also starred actors Jill Rutland and Luke Barton who were ‘honest, raw and talented individuals with perfect chemistry’.

I now find myself at the Brockley Jack Theatre to see After Three Sisters, Simon’s new play set in two time frames with two sets of characters – one in Moscow (1905) where the three sisters (taken from the famous work of Anton Chekhov) return to the Russian capital to realise it is not what they remember it to be. Meanwhile, scenes and stories take turns as we are taken to London in 2011 as well, where three Russian sisters (played by the same actresses) struggle to keep afloat in what could be considered a city on the brink of crumbling. This is indeed an ambitious project for Simon but as were his previous plays, which were strong in depth, darkness and detail. Do I think that this production is equally as impressive? Unfortunately not.

As well as welcoming back the talents of Rutland and Barton, actresses Violet Patton-Ryder and Sarah Cullum join Rutland in playing the famous sisters. Patton-Ryder, Cullum and Rutland play Olga, Irina and Masha respectively in the two time frames whilst Barton takes on the role of Nikolai in 1901 and angered, middle-class Jamie in 2011.

Rutland strives with charisma and stage presence and Barton attempts to give a strong performance in characters that, unfortunately, do not have the depth of the previous roles I’ve seen him play. Additionally, the couple’s chemistry is not as strong and sometimes it is like they are giving two separate performances when together. Patton-Ryder is strong and captivating with a voice that you hang off of every word to and Cullum represents the innocence and youth of her characters strongly. Unfortunately, things dilute when our scenes in Moscow transfer to our characters in London. All of the actors present less believable characters in the London setting, with inconsistent vocal styles and fail to represent modern, struggling Londoners on the brink of rebellion and self-destruction while still trying to express their frustrations.

The set has a few major faults, one being a bedroom on the corner on the stage being blocked by white curtains, making half the audience see only the foot of the bed. The spacing and space, in general, is hard to define and for the actors to work around. Direction is lacking as scenes pass with not much being of remembrance. There are some brief moments where the attention is drawn back in but it’s due to the credit of the actors rather than the directing or script.

Simon’s writing is something that I adored in my last experience – but this time around seems to be the main reason why the piece just isn’t working for me. The ideas working around it’s inspiration is a stretch, especially with the London setting. For example, comparing the London Riots to Russia’s peacemaker riots is a bit of a stretch and the writing expressing so makes me feel that the London Riots are being misrepresented in this piece for something it never was. Scenes drag and we leave not caring about characters so when drastic, shocking events happen, the majority of the audience are unintentionally left unphased.

This play for me, for the lack of a better term, is boring and needs work. Though. I’m not willing to give up on Simon as he did create what I thought was ‘the most provoking piece of theatre of recent memory’, last year and despite this play’s faults, there is something there – just not for me.

1905. Moscow. Olga, Masha and Irina return to the capital to find that it is no longer the peaceful city of their childhoods.
2011. Lewisham, London. Three Russian sisters try to stay afloat in a city on the brink of tearing itself apart.
Situated around the events leading to the St. Petersburg massacre and the 2011 London riots, Neil Smith’s new play questions what makes a city and a family turn on itself, and who decides how we will be remembered.

Living Record presents the premiere of Neil Smith’s revolutionary tale of history repeating itself. After Three Sisters, is a vivid piece of new writing, inspired by Chekhov’s famous work, which questions why we continue to turn our backs on reality and become swept away by dreams. “Things will change today, you’ll see. It will be quite something.”

This play was first put on at The Mill at Sonning in early 2010 - the world has, of course, changed significantly since then, and the script has been … END_OF_DOCUMENT_TOKEN_TO_BE_REPLACED

It’s easy to see why the Orange Tree has brought this one back for another run, less than a year after its first outing here. This is a bold, … END_OF_DOCUMENT_TOKEN_TO_BE_REPLACED

I always loved Choose Your Own Adventure books. Definitely not the Steve Jackson ones where you had to roll dice (who did that?) to find out whether … END_OF_DOCUMENT_TOKEN_TO_BE_REPLACED

Well, there’s a bit about Pablo Picasso’s (1881-1973) paintings in this show that bears his name. But it’s mostly about his approach towards women. … END_OF_DOCUMENT_TOKEN_TO_BE_REPLACED