I will be honest and say that an immersive, family orientated show is not something that immediately appeals. So imagine my shock when I left Iris Theatre’s phenomenal production of Alice Through The Looking Glass completely buzzing.

Our story begins with Mrs Grey in a state of madness. When the mirror smashes and she is pulled through to the other side it’s up to a young Alice to make her way across the giant chess board, with a little help from some familiar characters, to save Mrs Grey from the Jabberwocky.

Adapting Lewis Carroll isn’t easy; his books are a series of encounters, followed by Alice waking up. Writer Daniel Winder has retained the book’s structure, even adding one with a wasp that Carroll originally omitted. The added quest, creates a little bit of drive and give a us a rather epic finale. 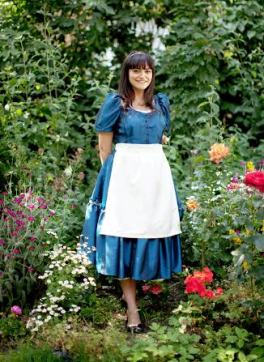 The show utilises every inch of St Paul’s Church and its beautiful gardens, which provided a wonderful backdrop for the action. The transient nature of audience really adds to Alice’s journey and also keeps the energy up, bringing to the proceedings a sense of discovery.

You’re ushered from location to location by actors who disappear and reappear as completely different characters in the blink of an eye. They gave performances that drew from pantomime but never got silly. Every member shone, each injecting multiple roles with warmth and humour that worked to bring this world to life.

Laura Wickham portrayed the seven and a half year old Alice, with youthful enthusiasm. As the Red Queen, Anne-Marie Piazza gave a marvellous “best of British” whilst Valerie Cutko enthused a confused White Queen with a beautiful vulnerability. Dafydd Gwyn Howells and Jos Vantyler stole many of their scenes as Humpty Dumpty and the Lion respectively, with the audience in stitches.

Lewis Carroll’s words have never sounded better, and I was constantly impressed with the delivery of lines that left your head in a spin. Some poems were given an epic performance, with Cutko’s Jabbawocky particularly powerful, whilst others were given the musical treatment, such as the Walrus and the Carpenter, which were brilliantly enacted.

Original music, accompanied by the versatile Leo Elso kept things moving between scenes, and provided some of the show’s tender moments. A song between Alice and the White Knight, lovingly played by Nick Howard-Brown brought a sense of true significance to the finale. It was, however, the beautiful duet between a united young and old Alice that brought a tear to the eye.

This is definitely one for the family, with the adults laughing louder than the enthralled children. At two and half hours, and a rather frightening finale this may be a bit much for some of the younger ones, although it would make a fantastic first theatrical experience. With an outstanding cast and fluid direction from Jamie Jackson, this could just be the show of the summer.

After the success of 2013 Iris Theatre returns for a 6th year of its celebrated summer season in the gardens of St Paul’s Church, Covent Garden. Following on from our 2013 smash hit family show, Lewis Carroll’s Alice through the Looking Glass will be presented throughout the month of August.

Iris’ brand new production of Alice through the Looking Glass will take us back into the fantastical world of Lewis Carroll’s Alice. Stepping through the surface of a magic mirror the audience will join Alice as she journeys across a checkerboard world filled with fantastical creatures and talking flowers.

On the way she will meet friends, old and new; the Mad Hatter and the March Hare, the Lion and the Unicorn, Tweedledum and Tweedledee, before facing the fearsome Jabberwock to win her crown. Returning from last summer the writing team of Daniel Winder and Candida Calidcot will ensure this fun, family story will be packed full of music and song.

It is the duty of every citizen to answer the call to support and protect the United Kingdom and its allies so last night, while the rest of the … END_OF_DOCUMENT_TOKEN_TO_BE_REPLACED

Harold Pinter only ever wrote one novel. And, let's be honest, he didn’t rush into this literary endeavour. He started it in 1950 and the book was … END_OF_DOCUMENT_TOKEN_TO_BE_REPLACED

How far would you go for the people you love? What lies would you tell? What sacrifices would you make? That’s the question at the heart of The … END_OF_DOCUMENT_TOKEN_TO_BE_REPLACED

“All political lives, unless they are cut off in midstream at a happy juncture, end in failure, because that is the nature of politics and of human … END_OF_DOCUMENT_TOKEN_TO_BE_REPLACED