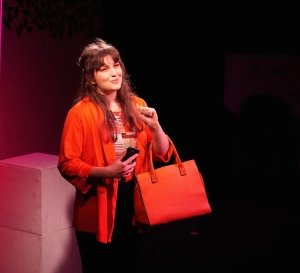 Given that the gestation period of some musicals can be measured in years, Collisions is something of a miracle. At half an hour long, it’s briefer even than most shows at the Edinburgh Festival Fringe.

Nonetheless, the Sydney-based City Theatre have put together a musical with a coherent storyline and numbers that advance the narrative, in just over a week. The four characters, unnamed (as far as I could deduce) are all living their own lives, telling their stories mostly through exposition (think Jersey Boys, with direct addresses to the audience galore).

The storylines are very different, and the production manages to shift from one to another (and back again) quite seamlessly. There’s a contented character who takes life as it comes (Aarin Starkey), who is out for the day spending the loose change they have amassed thanks to a thorough clean of their apartment – $125.37 to be precise. A frazzled, suited man (Andrew Jackson) would rather not participate in a group lunch, given that he’s spent the morning in various meetings and is obliged to be in the company of the same group each and every working day in any event. One lady (Skye Beker) is off to meet a friend – or is it really an acquaintance? They used to know one another very well but drifted apart as time went on.

Another lady (Brooklyn Newey) is at a crossroads, with several options to choose from, including more studying, perhaps, or accepting a job offer. Her narrative gives rise, then, to the musical’s ‘I wish’ number, a harkening back to a time when things were considerably simpler and her future was as straightforward as getting a job, working hard at it and being the best version of oneself that one can be. The different stories are all relatable, particularly for those who live in urban areas, and the amount of everyday detail in the script is phenomenal, down to someone already running late discovering, once again, that commuter public transport can be utterly merciless when it wants to be, and someone else’s personalised coffee mug not being in its designated place in the office kitchen.

There is nothing new, especially for regular theatregoers, about a storyline in which life, despite its usual imponderables and frustrations, is proceeding as one would reasonably expect, before a critical incident suddenly occurs, throwing the worlds of the show’s characters out of their usual rhythms. Neither is there anything new about a musical that sends a message to its audience to enjoy life and see the positives in the world. It is commendable that this show does so without being preachy or overly saccharine, and there are decent portions of food for thought in this briskly paced and absorbing production.

Project Interlude is a challenge to write, compose, rehearse, stage and perform a brand new musical in just one week. Our team takes a theme voted on by you on Saturday morning and create a 20-30 minute work ready to be performed the following weekend.
https://citytheatre.com.au/

The overarching theme of ‘Escape’ in the Response monologue series seems reasonably apt for these times in which so many restrictions, albeit for … END_OF_DOCUMENT_TOKEN_TO_BE_REPLACED

There were moments in Two Billion Beats when one wonders if the youth of today really do talk in the way in which the script says they do. Do they … END_OF_DOCUMENT_TOKEN_TO_BE_REPLACED

I have spent much of the last thirteen months of Lockdown (it seems a great deal longer!) in trying to avoid ZOOM meetings, but Dr Will Houstoun’s The … END_OF_DOCUMENT_TOKEN_TO_BE_REPLACED

Diplomacy is better than brute force, though in Ali Stroker’s case it wasn’t so much consultation and dialogue that secured her roles across film, … END_OF_DOCUMENT_TOKEN_TO_BE_REPLACED