Home » Reviews » Ania and Riss are Trying Their Hardest | Review 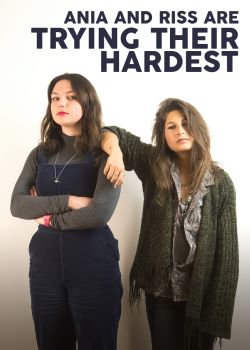 Two young women come bounding onto the stage, preparing us for an evening of “existential darkness”. Despite this promised theme, they are all-smiles, instantly putting the audience at ease. They immediately call out the “elephant in the room” which is their gender. Within the realms of comedy, it is a protocol that this must be acknowledged or commented upon in one way or another whenever a woman takes the stage, so I appreciated that they choose to address this themselves. Magliano invites a male audience member to look at her breasts, as the women encourage the audience to “get their objectification out the way” so that they can get on with the actual show. It is a shame this has to be done at all, but I really admire the women for choosing to go this way about it, taking full control of the situation.

First up is Magliano. She takes us through her childhood, with boys commenting on her leg hair at the age of 6, we learn about her dad’s affair with his secretary and bad boyfriends. The narrative is so cleverly written, with satisfying callbacks to earlier jokes and a coherent series of laughs all the way up to her singledom and use of vibrators. There is the occasional nod to her therapist, drawing in on an important issue for young people in today’s society.

However, this is never over-played and the way she structures her set allows the audience to get to know her and contextualises every subject matter she engages in. This, alongside the overarching call-outs on misogyny that everyone experiences or is aware of, means that she subtly tackles topical problems in an approachable way. We can relate – and her intelligent navigation of this via her own autobiographical account means that she has won
our respect and trust through her honesty, so we value what she has to say. It’s stand-up – there was a lot of talking, but she is present throughout. A particularly funny moment was when an audience member’s phone rang and she offered to answer for him, whilst discussing dildo use. She then apologised when he went to turn it off before correcting herself, and stating this was just common courtesy. Magliano claims her persona is generally humble. We see this here. It would be interesting if she developed this idea and we saw her transition from apologetic and vulnerable to self-assured. This could serve as a through point that might shake things up a bit and offer a bit more character development and variation to the set.

Obolensky follows. She is full of energy as she takes on the stage and doesn’t allow the room’s atmosphere to dip. She screams to get her nerves out and then offers an audience member a “Welcome Information Pack” so that he can learn a bit about her. The piece is scattered with moments like this where she breaks away from the microphone. She tells us of how she tries to take on the role of “angry lesbian”, her love of Avril Lavigne and how the singer actually died after her first album and now has an imposter in her place. She also speaks of a year spent trying to become a better person, through working with a therapist as well as undertaking long hikes and workshops where she acts as a giraffe. Her interpretation of a giraffe “dancing through chaos” is something we get to witness and the ridiculousness of it is thoroughly entertaining. The physicality she puts into her
performance as a whole sets her apart and makes for an interesting watch, but whilst I enjoyed most of this, some of the parts where she danced didn’t quite work. Following a poignant message on why she chooses to engage with catcalling, feminism and mental health issues through comedy, she tries to “ride it out” with a dance to Britney Spears’ “Everytime”. I understand the want to revert back to comedy but it isn’t needed. I think it was a brave decision to interject the comedy with her own personal opinions on these issues. It was touching and thought-provoking and didn’t need to be brushed aside at all.

Fifty Fifty makes for an hour of well thought out comedy from two intelligent and more than competent performers.

This happens to be a timely production: employment has hit the headlines again at the time of writing, this time because of the concept of ‘quiet … END_OF_DOCUMENT_TOKEN_TO_BE_REPLACED

An opera (well, technically, an ‘opéra comique’, as there is spoken dialogue) in a relatively small space like the Charing Cross Theatre calls for … END_OF_DOCUMENT_TOKEN_TO_BE_REPLACED

Shoes, one would have thought, are fairly recession-proof. The problem for Charlie Price (Joel Harper-Jackson, reprising the role he previously played … END_OF_DOCUMENT_TOKEN_TO_BE_REPLACED

The descriptions of what happens in this show are so vivid that paradoxically they leave nothing to the imagination – and, at least at the performance … END_OF_DOCUMENT_TOKEN_TO_BE_REPLACED