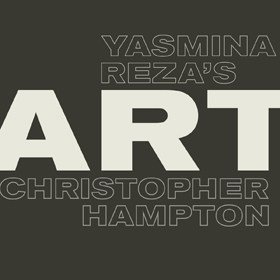 It’s a hoot, is Art, one of those complex without being overbearingly complicated plays that packs more into one and a half hours than some plays do in two and a half. At the centre of the dialogue between Yvan (Tim Key), Marc (Paul Ritter) and Serge (Rufus Sewell) is indeed a piece of artwork, and it’s in the refreshing simplicity of the show’s surface-level ‘what is it about?’ overview that drew me in very quickly to this intense and dark-humoured production.

It would be saying too much to describe the artwork in question, though I agreed with Marc’s blunt assessment of it, even if I would be likelier myself to have adopted Yvan’s more diplomatic response, at least to begin with. But whether one appreciates contemporary art or not (I personally don’t think much of abstract works in galleries that require queuing up to read the descriptions next to them in order to comprehend them) it’s the amount of money that Serge allegedly paid for a particular painting – and what that exorbitant amount represents – that so rankles Marc to the point where the play explodes into outbursts from all three characters.

The outbursts prove more therapeutic than any of the therapy sessions Yvan forks out for (the ridiculousness of wasting money on the unnecessary seemed to be a running theme), and it’s Yvan that kicks things off as the play goes into overdrive, with a long and rapidly-delivered account of a Very Bad Day. Quite rightly, it was mesmerising enough to warrant its own round of applause from the audience.

But this isn’t a mere screamathon. It’s a well-constructed play, allowing audiences to get to know each character in some depth, and although there’s so much to draw out from it, it never feels rushed or as though it’s trying too hard.

The music piped into the auditorium between scenes was quite unbearable; a possible metaphor, I suppose, for Marc’s state of mind now that his younger mentee Serge has now matured somewhat and isn’t needful anymore of Marc’s advice. The lack of sentimentality overall was refreshing, and the closeness of the trio’s long-lasting friendship allowed them to state things bluntly and honestly, unfiltered by the lack of a need for decorum. That one character may take umbrage at what another has said shows just how human each man is, whatever external front they may insist on continuing to put on. Whilst I found myself laughing out loud at some of the punchlines – some of which can be rather brutal (can calling someone a “spineless amoeba”, albeit to their face, as opposed to behind their back, ever really justified?) – on reflection, a fair amount of the comedy is also deeply profound.

The set (Mark Thompson) is deliberately minimalist, not just in keeping with the contemporary art being discussed, but allowing the excellent script (Yasmina Reza), which considers much, much more than a mere painting, to shine properly. Look out, too, for the lighting (Hugh Vanstone) in the last few seconds of the play – without saying too much about it, it’s so very striking and poignant, as is this production overall. One more thing: a number of soliloquies from all three characters during the evening’s proceedings engage the audience still further. A fascinating and lively production.

‘Three friends and a white painting.’
One of the most acclaimed plays of recent times, Art premiered in London twenty years ago and went on to become a phenomenon, winning the Moliere, Evening Standard, Olivier and Tony Awards. Director Matthew Warchus reunites the entire original creative team to revisit Yasmina Reza’s dazzling study of friendship, prejudice and tolerance.

The thing about Panto is not to over-think it. It’s about having fun and surrendering to the Christmas spirit. Like Christmas crackers, there is a … END_OF_DOCUMENT_TOKEN_TO_BE_REPLACED

Anyone who's worked in investment banking knows it's largely an intellectually-free zone, polluted with people who calculate each other's value … END_OF_DOCUMENT_TOKEN_TO_BE_REPLACED

By the production’s own admission, the version of events as detailed in Bonny & Read is unlikely to equate to an exactly full and fair account of … END_OF_DOCUMENT_TOKEN_TO_BE_REPLACED

This early Rattigan play has had an interesting life. Set in the Second World War and premiered while that conflict still raged, it has since found … END_OF_DOCUMENT_TOKEN_TO_BE_REPLACED