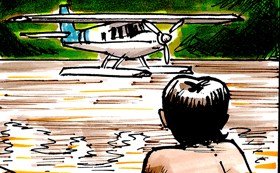 Don’t Sleep There Are Snakes is a phrase never actually used in the show, and it’s the book by Daniel Everett of the same title that reveals precisely why the Pirahã (roughly pronounced ‘PEE-ra-ha’) people of the Amazon rainforest even have such a saying in their vocabulary. I just about managed to thunder through the book prior to seeing this theatrical adaptation of it; necessarily, while there are plenty of details that are recognisable in the stage version, there are many other details that are missing. I do not envy the ‘simple8’ theatre company who made the decisions as to what to leave in and what to leave out. It’s a discussion that, I suspect, could continue until the cows come home and then some.

Dan (Mark Arends) is on a mission. At least the missionaries in The Book of Mormon musical were able to do their thing as a group; Dan, as the story is presented here, is on his own, sent out by a denomination (which one is not made clear in the show). I make this point because his findings are easily dismissed later on by a fellow academic (played by Rachel Handshaw) because there can’t be a proper peer review process, because he was doing what he was doing single-handed, so who can say whether there is any accuracy in any of his assertions?

Anyway, Arends’ Dan is only off-stage for perhaps seconds at a time, and to sustain the attention of an audience for 90 minutes, even when going into borderline ridiculous levels of detail about linguistics and something called ‘infinite recursion’, is quite phenomenal. The narrative moves at a sometimes breakneck pace – the only thing that stopped me from struggling to keep up with the academic discussions was that there’s an entire section in Everett’s book devoted to linguistics, including an analysis of various theories developed over the years, and so I had a general idea of where the conversation was going. Mind you, if this production had meandered its way through the academic debate rather than taken its whirlwind approach, it would have been a lot worse, and severely tested the patience of the audience.

Most of the cast play multiple roles, and switch between them often very rapidly, but it’s almost always clear who’s who; any ambiguity is really down to Dan’s Western mindset still not fully synced with this very different tribe (if that’s the right word) whose norms and style of living is so unlike our own.

Yes, there are the predictable laughs with watching someone learn a new language, and – as Dan points out – their culture too. For what can be considered respectful in the West can be downright rude and imposing as far as the Pirahãs are concerned. But there’s much more to it than that, as Dan’s own allegedly very strong evangelical faith is challenged by what he sees and experiences in the Amazon. The Pirahã way of thinking is, for me, best summarised (somewhat ironically) by St Matthew’s Gospel, chapter 6, verse 34. “Take therefore no thought for the morrow: for the morrow shall take thought for the things of itself.”

What we have, then, is a fascinating exploration of a longitudinal study. We are spared silly accents – they are unnecessary, because it is assumed that Pirahã characters are always speaking in their native tongue. Things are, on the whole, explained in a way that is both instantly understandable and remarkably faithful to the original book. I found this to be a highly imaginative and sometimes very physical production, with minimal set and props – demonstrating, as the Pirahãs themselves do, that much can be achieved even without big budgets. An astonishing play.

Pirahã [(n) piɾaˈhã] a remote Amazonian tribe with a language no outsider has ever understood.
Daniel Everett, a linguist and missionary, is sent into the jungle with a clear purpose: to learn their language and convert them to Christianity.

But as he struggles to communicate, he uncovers a culture like nothing he’s ever imagined. What he discovers blows apart modern linguistic theory, forcing him to question his faith and his understanding of what it means to be human.

Following the critically acclaimed The Cabinet of Dr Caligari and Moby-Dick, the award winning ensemble, simple8, return with an adventure wrenched from the heart of the jungle, that traces how language, culture and experience shape us all.

I have seen some outstanding acting recently at the intimate Finborough Theatre, and this new play is no exception. The highly talented cast quickly … END_OF_DOCUMENT_TOKEN_TO_BE_REPLACED

In the pandemic (remember that?) I worked in adult social care. My role was to help older people in their own homes with daily tasks - I’d cook meals, … END_OF_DOCUMENT_TOKEN_TO_BE_REPLACED

The world-famous Wilton’s Music Hall and the children’s classic The Wind in the Willows make perfect bedfellows. Piers Torday has written a version … END_OF_DOCUMENT_TOKEN_TO_BE_REPLACED

Some journalists get, as it were, a bad press, though some of them don’t help themselves with some of the things they write and do. This play doesn’t, … END_OF_DOCUMENT_TOKEN_TO_BE_REPLACED

Paul (Lewis Bruniges) and Freddie Metz (Oliver Yellop), who identify as cousins, are so desperate to get out of the German Democratic Republic, … END_OF_DOCUMENT_TOKEN_TO_BE_REPLACED