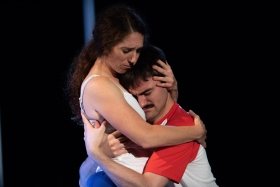 Stephen Sondheim’s Company poses the question: What Do You Want To Get Married For? The current revival at The Gielgud Theatre is playing to sell-out houses. It’s a classic of musical theatre. Baby a new musical takes up the story. Baby has got Sondheim written all over it. Imitation being the sincerest form of flattery. Besides all art is derivative. And if you are going to emulate then learn from the best in the business. Baby does just that and the result is a fantastic musical which has all the hallmarks of a Sondheim show.

With a book by Sybille Pearson, music by David Shire and wonderful lyrics by Richard Maltby, Jr, Baby is a thought-provoking and entertaining exploration of what is probably the most life-changing decision any of us will ever take. The stage is dominated by a giant banner: Welcome to the World. And that alone jolts us into realising what a momentous event the birth of any baby is. The only props on stage are six large boxes. These are piled high to spell the word Baby. They a resemble baby’s toy building block that teaches the letters of the alphabet. They do double duty as props for the play and especially as a bed. Where appropriately much of the crucial action takes place. Especially the act of creating a baby! Hilariously so in the scenes between Pam (Laurel Dougall) and Nick Sakarain (Stuart Scott) as they follow the surreal instructions from their Dr on how best to conceive.

Like a Sondheim show we start with three couples overlapping and then the show reveals each couples particular dilemma. The three couples represent the three stages of conception: Students just starting out, a couple in their thirties in a race against time and a couple if their 40s who have made a mistake after a night out. Each couple is convincing. Danny Whelan and Holli Paige Farr as the young students are just right. Laurel Dougall and Stuart Scott as thirty something’s are the most comic of the three couples and Christopher Lyne and Barbara Jaeson are both excellent as the unexpected 40s couple who are plunged back into it all over again just when they thought they had completed the journey. So the structure of the musical is well made. The story shifts as we see the dilemma from different points on the demographic timeline. The songs are both wonderfully witty and poignant. And as with Sondheim, these songs capture that bittersweet conflicted state of being both optimistic and anxious at the same time. This doubleness can be heard in the music which has that trademark Sondheim key shift from the upbeat to the abrupt note of doubt. Also, the titles suggest as much; What Could Be Better? – Fatherhood Blues – And What if we had Loved Like That? – Each striking that questioning, not quite sure, note of doubt and uncertainty.

Oscar Hammerstein mentored Sondheim. I don’t know if David Shire and Richard Maltby, Jr have met Sondheim but it seems to me that they are doing all the right things to put themselves in the position of being not just the heirs to Sondheim’s legacy but the Rodgers and Hammerstein for the 21st century. I can’t offer higher praise than that.

Babies may be small bundles of joy but they sure are a big complication! Baby is a warm-hearted musical rom-com that explores the highs and lows of impending parenthood.

In the spring – the season of new beginnings – three couples discover that they’re pregnant. There are the college students, barely at the beginning of their adult lives; the thirty-somethings, having trouble conceiving but determined to try; and the middle-aged parents, looking forward to seeing their last child graduate from college when a night of unexpected passion lands them back where they started. As the seasons change, so too do their feelings towards each other. Forced to face their insecurities and changing relationships, they’ll all come to realise that there’s never a perfect time to have a baby.