The overarching theme of ‘Escape’ in the Response monologue series seems reasonably apt for these times in which so many restrictions, albeit for public health reasons, have been imposed on freedom of movement. This rapid-fire set of short plays, twelve wrapped up in about eighty minutes or so, collectively explore various means of escape, from the sublime to the ridiculous. In Living in Fiction by Lucinda Coyle, Holly Read’s character looks back to when she imagined she was in various stories in her childhood, something that has carried on to some extent into her adult life. Fictional worlds seem easier to navigate, and although she periodically sees a counsellor, there are certain things that are best left unsaid because they will only lead to more questions, more assessments, and more unwanted intrusions. I’m inclined to side with the character: she seems capable enough of distinguishing between fact and fiction, and her coping mechanisms don’t appear to be harming herself or anyone else. 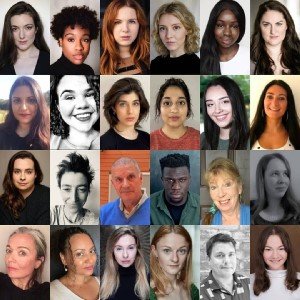 Likewise, in Shooting Star by Ruth Mestel, Svetlana Tyan’s character wanted to jump on a broomstick and fly out of her window in her childhood. I found the narrative somewhat difficult to follow but it suggested (unless I’ve totally misinterpreted it) that one’s imagination can help cope with life’s many problems and imponderables. Bizarrely, she suddenly decides she should give a TED Talk – about what, I’ve no idea, as the play ends abruptly at that point.

In Aftercare by Darren Smith, Georgia (Francesca Baccarella) is, as far as I could deduce, a participant in a television series of some description. The working atmosphere is far from idyllic, with the near-constant threat of her character being written out in some way. I initially thought she was in a reality television show, and although there is some talk of audience reaction to ongoing storylines, there are no references to public ballots and/or rounds of eliminations. There’s a cliff-hanger ending, which led me to suspect this may be a part of a longer play. There are many elements of this story that will likely be very recognisable to a lot of people in the entertainment industry – and not in a good way.

In Parked by Clare Campbell, Manisha Patel’s character talks about a former partner, a builder, who she still sees occasionally if she just so happens to be in the car driving past a construction site he is working on. She sits in a car park thinking, as she has been doing whenever time permits for the last few weeks, about her next move, relationships-wise. But at least she has freedom of choice, which Lucy Sansom’s character in Family Inheritance by Harriet Gandy feels she has been denied. Her mother has left a legacy, but it is not one the daughter wanted, where (as she would have it) happiness and busyness are one and the same. “I tried so hard not to be you that I stopped being me too”, she concludes, as though writing one final letter to her mother. It is a play (if it hasn’t been done already) worth expanding to a full-length piece – as it stands, it raises more questions than it answers.

In Super Pissed by Temi Majekodunmi, Rima Nsubugna’s young supermarket till worker character dreams of moving to the USA, away from her current existence of low wages, zero-hours contracts, and surly customers. Reflection by Syeshia Sweeney finds Yazmin Belo’s character in a questionable relationship. The question ‘Why doesn’t she just leave?’ summarily fails to understand the complexities of the situation. I instantly sympathised with Amandine Farrugia’s character in Paulie by Emma Dawson: her sister has stopped talking to her, and she can’t find out from her what the problem is, because her sister has stopped talking to her, so she is seriously wondering if it had something to do with a refusal to eat lasagne some years ago on account of being a vegetarian.

Just as absurd, if not more so, was possibly my favourite play of the evening, Carnivore by Vivian Lermond. Rebecca Robinson plays a tea shop employee, or as a regular customer Laurence would have it, a ‘tea connoisseur’. For whatever reason, she accepts an invitation from him to dinner, but realises too late it is at a vegan restaurant where the beverage of choice is carrot juice. Never mind her preference for a carvery. There were various other aspects of Laurence’s character, behaviours and hobbies that were most undesirable, and I chortled away at the reason she came up with to end the dinner considerably earlier than planned.

A very varied mix of scenarios made for an enjoyable evening, in which both the breadth and depth of various means of ‘escape’ demonstrated the innovation and creativity of the show’s writers and cast.

Response 5: ESCAPE is a collection of monologues written by emerging writers and performed by an all female cast. The show is produced by Blink Theatre, performed by members of The Actors Cove and directed by Lotte Ruth Johnson.

The theme ESCAPE was used as a way to offer writers a joyful and positive writing experience so as to shift focus from the current pandemic. All 12 writers were selected by a team of readers to create a varied and exciting selection of new writing.

It’s an intricate plot, laced with some subversive humour - that the female character is simply called ‘The Woman’ (Molly Lynch), for instance, is … END_OF_DOCUMENT_TOKEN_TO_BE_REPLACED

Andrea McArdle didn’t, when the 1978 movie Rainbow was released, look or sound like Judy Garland, and she still doesn’t. You’d be forgiven for … END_OF_DOCUMENT_TOKEN_TO_BE_REPLACED

TENNIS ELBOW is the first play that John Byrne has written for thirteen years, and is in fact a companion piece to his critically successful Writer’s … END_OF_DOCUMENT_TOKEN_TO_BE_REPLACED

It’s all a bit banal, really - or perhaps I’m too heavily influenced by some of the other online productions that I’ve seen recently, which deal with … END_OF_DOCUMENT_TOKEN_TO_BE_REPLACED

Mandy Gonzalez is one of those Broadway actresses with a number of dedicated fans and followers, and it’s easy to see why given her sunny disposition … END_OF_DOCUMENT_TOKEN_TO_BE_REPLACED