Home » Reviews » Breathe at The Lion and Unicorn Theatre – Review 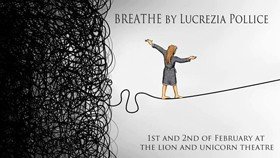 This is a shrewdly observed dark comedy about coming of age and friendship in the modern age. Twenty-something Maria has taken to adulthood like a duck to a jet turbine. Her flat-mates, Rachel a teacher, and Eddie, a budding entrepreneur, are already off the bottom rungs of the career ladder, leaving Maria, an aspiring writer and reluctant barista, increasingly isolated. Maria’s anxiety, ever present since childhood, becomes a full-blown depression. Her friends struggle with her increasingly self-destructive behavior and give her reams of good advice, and are exasperated when she resorts to recreational pharmaceuticals, supplied by the beautiful and charismatic livewire, Sophie.

Live action and film are interwoven skillfully, as Pollice, directing her own work, keeps the tempo brisk. The desperate loneliness at the heart of hedonism is particularly well illustrated in a video sequence of a night out, moving from fantasy to nightmare, as increasingly strong doses of alcohol and chemicals flood Maria’s system, she becomes isolated and frightened in a teeming crowd.

The characters are rounded and credible and well played by a talented cast. The pragmatic and capable Rachel (Olivia Valler-Feltham) is 25 going on 50, seeks ways to intervene in her friend’s life. We see the man-boy Eddie (Peter Silva) going through maturity, in a series of hilarious vignettes, as he sees Maria pay the cost of choices he has left behind, led on by Tamzin Murry as Sophie, and the cast wring the darkest comedy from Maria’s situation.

But the star of the night is Zoe Templeman-Young, who gives an outstanding performance as Maria, as the archetypical melting snowflake. She does her best to cling to rationality, but her anger and confrontation become needy and pleading. Her mood swings, finding hope in small triumphs and despairing about imagined slights, ring true. Everyone can see the car cash in slow motion, including the self-deprecating Maria herself, who is by no means unaware of the cost of the bargains she strikes.

Acknowledgement is due also to the uncredited costume designer whose subtle but (in retrospect) obvious use of visual metaphor sets up a satisfying reveal. This is a well-constructed story; compact and rounded. Pollice is to be congratulated for her refusal to preach, and for allowing the characters the dignity of bearing the consequences of their actions, Sophie’s denouement was quietly horrifying.

It is set firmly in contemporary Britain, with its hang-ups and neurosis. The simmering resentment that this (and every) generation feels towards its peers is both mute and deafening. But Pollice has resisted the temptation to make the milieu the story, and it could be set in pretty much any age.

This development production of a slightly abbreviated version this work sold out its two-night run well in advance, leaving producer Campagnolo rueful that she had not secured a longer run. But this ambitious company are already in negotiation with bigger houses (hopefully with better sight lines and projection equipment), and it is to be hoped that the show will transfer and be given the full production it deserves.

New play Breathe, after readings at the Young Vic and scratch night performances at the Bread and Roses, is staged in a full production at the Lion and Unicorn Theatre this February. The play tackles the thorny issue of mental health amongst millennials trying to make their way in life.

Breathe pans across the struggles of four housemates living in London trying to successfully accomplish their dreams. Personal secrets, fears and dreams emerge as their lives intertwine, revealing the importance of human connection and friendship in the face of anxiety and depression. Will they choose security or transform their fears into fuel to conquer their dreams?

If the audience were to be exposed to full versions of the seventy-four songs listed in the programme, it would be a very long show indeed. I suppose … END_OF_DOCUMENT_TOKEN_TO_BE_REPLACED

How can a play be both charming and devastating? Through its tight script, abundant humour and pitch-perfect performances, 4th Country manages to … END_OF_DOCUMENT_TOKEN_TO_BE_REPLACED

Britain, so a London cab driver once told me, is obsessed with the Second World War, as though it happened just recently. Power Luncheon would seem, … END_OF_DOCUMENT_TOKEN_TO_BE_REPLACED