In 2021, the Foreign Office decided it would “not consider any new funding to Oxfam” until an investigation into abuses of power, including bullying and sexual misconduct, were investigated. In 2015, a charity called Kids Company ceased operations after the Government decided it would no longer fund its activities, whatever they may or may not have been. The (fictitious) charity portrayed in this production, called Number 93, was set up by Karen Keane (Louise Devlin) and Paula Campbell (Laura Shipler Chico) to support children who struggle in mainstream education by providing them, amongst other things, with a school that caters for youngsters on the autistic spectrum. 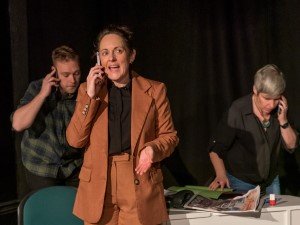 There’s a level of arrogance that Keane doesn’t see in herself. In a meeting with Simon Ericson (Warren Palmer), apparently a government minister (I say ‘apparently’ as he wasn’t quite sleazy or thoroughly dislikeable enough to be a parliamentarian), she recoils at the idea that her organisation is “too expensive”, retorting that hers is “the best”. Cheapest, as I have come to know in life, doesn’t necessarily mean ‘best’ either, but in any event, a charity that relies on bailouts from central government to remain a going concern is bound to be vulnerable to whatever the political priorities of the day are.

Connor (Bradley Crees), an office intern, turns out to be rather more intelligent and cunning than his junior position implies. He makes valid points, albeit in an uncouth fashion, about the charity’s alleged commitment to fairness and equality, while its employee base contains hardly any non-white people (in an organisation with premises in central London) and no people with disabilities (however these may be defined) at all. Hypocrisy isn’t just confined to the public sector, or the commercial sector, and the production seems keen to emphasise that while undesirable practices go on in the voluntary sector, it’s even worse than it is elsewhere, if only because people’s donations, given to support those less fortunate than themselves, are being misappropriated.

There is a degree of balance to proceedings, especially when Sarah (Nicola Mae Begley) turns up at the Number 93 office and waxes lyrical about how much their school has supported her son. Having heard reports through the grapevine that the charity is in substantial financial difficulty, she expresses strong concerns about the possibility of the school being forced to close its doors. There are other phone calls, as one would expect during the working day, as further evidence that there are some laudable achievements that take place.

Ultimately, the audience is subtly asked to determine for themselves whether the charity’s executives were victims of their own success, or if they had found themselves in a position of their own choosing by not sufficiently diversifying their income streams early enough. Keane and Campbell agree to throw caution to the wind (I would tell you how reckless they decide to be, but it would be giving too much away) – desperate times, desperate measures, and all that. You reap what you sow, as the old adage would have it. An intriguing look at the challenges faced by families of children with disabilities, there’s much to recognise about interpersonal dynamics in the workplace in what turns out to be a fast-paced and believable storyline.

Karen Keane and Paula Campbell have a day to raise funds to keep the charity they founded alive. The clock is ticking as they desperately fight a hostile red-top press and decide to break the law to survive, in order to appeal for a cash injection that could save their charity.

If the audience were to be exposed to full versions of the seventy-four songs listed in the programme, it would be a very long show indeed. I suppose … END_OF_DOCUMENT_TOKEN_TO_BE_REPLACED

How can a play be both charming and devastating? Through its tight script, abundant humour and pitch-perfect performances, 4th Country manages to … END_OF_DOCUMENT_TOKEN_TO_BE_REPLACED

Britain, so a London cab driver once told me, is obsessed with the Second World War, as though it happened just recently. Power Luncheon would seem, … END_OF_DOCUMENT_TOKEN_TO_BE_REPLACED